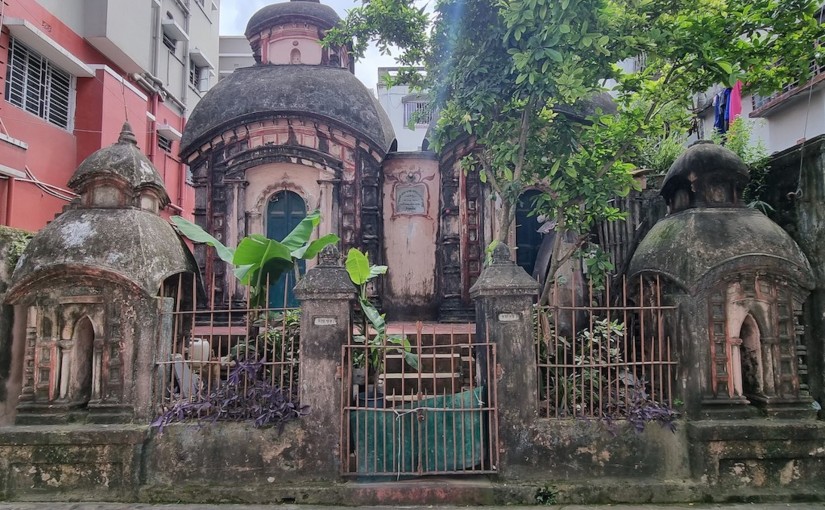 There are a number of temples in Baranagar – some of which are pretty old. One such temple situated near Kutighat is a twin Shiva temple more than 160 years old.

END_OF_DOCUMENT_TOKEN_TO_BE_REPLACED 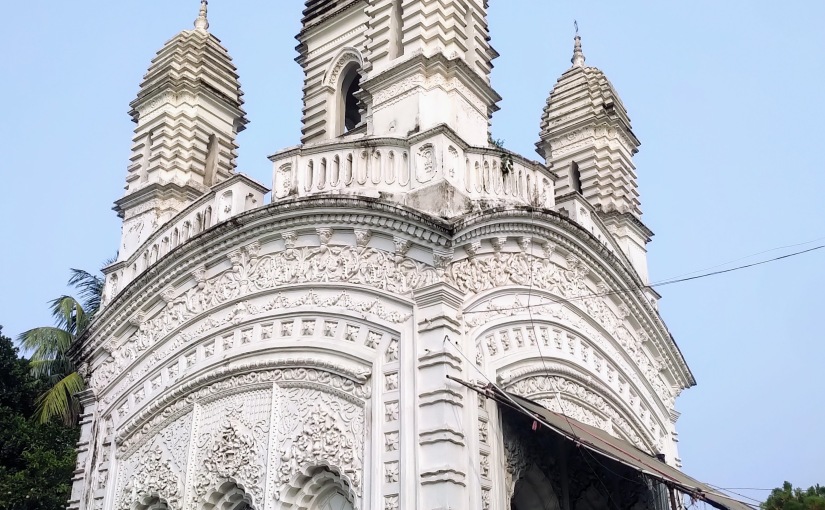 A beautiful pancharatna temple by the side of the Ganges at Agarpara in North 24 Parganas district of West Bengal will immediately draw your attention.

END_OF_DOCUMENT_TOKEN_TO_BE_REPLACED

Willingdon Bridge or more popularly known as Bally Bridge (now called Vivekananda Setu) will be celebrating its 90th birthday today. The bridge was inagurated by the then Viceroy of India Marquess of Willingdon on 29th December, 1931. A stone plaque commemorating the event is found at the Dakshineswar side of the bridge, though the condition of the same is not in a good state.

END_OF_DOCUMENT_TOKEN_TO_BE_REPLACED 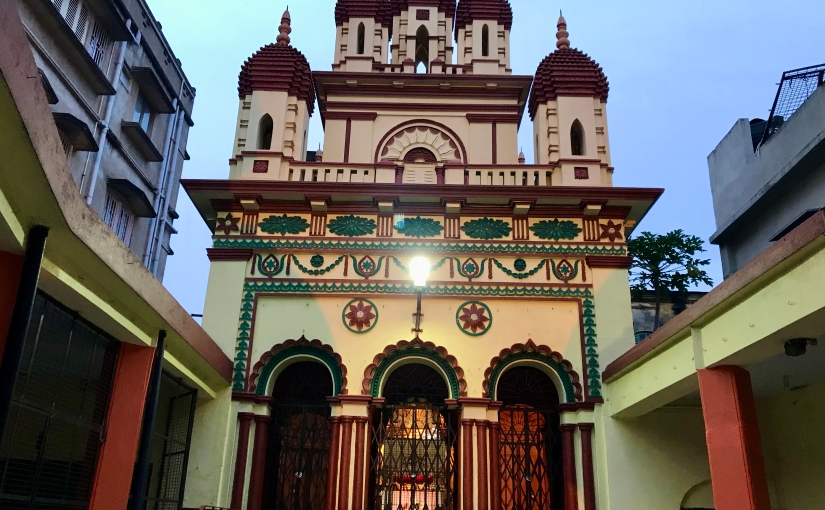 There are a number of Kali Temples in Cossipore-Baranagar area. I have come across six such temples of which four belong to Baranagar though there may be more and all of them are pretty old. I was fortunate enough to visit all the temples on the day of Kali puja in the year 2018. The four temples of Baranagar are Kalibari, Baranagar bazaar (1781); Siddheswari Kalibari, Kutighat (1843); Joymitra Kalibari (1850) and Pramanik Kalibari (1853).

Among the Kali temples of Baranagar, the one situated at the crossing of Gopal Lal Thakur Road and Kashinath Datta Road is the oldest. Founded in 1781, the presiding deity is Maa Siddhesewari. It is said that Nanu Thakur, who happened to be one of the forefathers of the present sebaits of this temple worshipped Maa Siddheswari from a very young age. The present sebaits of this temple are the Chakraborty family. The goddess is made of clay (Ganga mati) of the Ganges and is about six feet in height. Previously this temple was inside a hut, the roof of which is made of hogla trees. Daily worship is performed here though on each new moon (Amavasya) special puja is arranged. It was heard that Totapuri, Ramakrishna Paramahansadev, Rani Rashmoni, Balananda Brahmachari and Swami Abhedananda visited this temple.

Another Kalibari in Kutighat area is pretty old and on the day of my visit it was celebrating its 175th year. Built by zamindar Joynarayan Bandopadhyay in 1843, the south-facing temple follows the traditional dalan (flat roofed) type with six neo-classical columns. Though the temple has undergone renovation, but still it retained its old charm. Maa Siddheswari is worshipped on a daily basis but the main festival here are Falaharini and Ratanti Kali Puja apart from Dipannita Amavasya. The idol is made of wood. It was said that Ramakrishna Paramahansadev visited this temple on a number of occasions.

Pramanik Kalibari of 225, Pramanik Ghat Road was constructed in 1853 by Durgaprasad Dey and Ramgopal Dey of Dey Pramanik family of Baranagar. The presiding deity is Brahmamoyee Kali carved out of kastipathar. Daily worship is performed here twice – one in the morning and the other in the evening. The temple follows the traditional nabaratna style of Bengal temple architecture and is about 52 feet in height. The temple compound has also four aatchala Shiv mandir (Jamuneswar, Gangeswar, Dwarakeswar and Rameswar) – two big inside the courtyard and two small facing the road just at the entrance. Ramkrishnadev used to call Maa Brahmomayee as mashi and the same is written in the stone plaque.

Joy Mitra Kalibari of 39, Harakumar Thakur Strand, Baranagar which was built in 1850 is also a nabaratna temple but it does not follow the traditional spiral roof but has verandah on each corner of it. It was built by zamindar Joy Narayan Mitra of Shovabazar. Inside the temple sanctum is worshipped Maa Kripamoyee. Ramkrishnadev also visited this temple. There used to be two nahabatkhanas just outside the temple facing the Ganges but now only one remains and that too in a dilapidated state. There is also a chandi ghat – the pillars of which are still there today reminding us of the glorious past. A total of twelve aatchala Shiva temples – six on each side are present inside the temple compound. According to Shri Debkumar Mukherjee, this temple stood on an erstwhile Dutch cemetery and to remind all, in this context that the Dutch had settlements previously in Baranagar.

END_OF_DOCUMENT_TOKEN_TO_BE_REPLACED

Manchas are of three types – rasmancha, dolmancha and tulsimancha. A rasmancha (a temple-like structure generally octagonal in shape with the sides open and situated on a raised-platform) is the largest among the three. It was very common in the nineteenth century Bengal. The rasmancha is normally smaller in size than the main temple where the Radha Krishna deities reside throughout the year. The main purpose of building the rasmancha is to enable the people to witness the deities (here Radha Krishna) from all the sides on a special occasion (Rashyatra).

END_OF_DOCUMENT_TOKEN_TO_BE_REPLACED

Khardah, a town of Barrackpore subdivision of North 24 Parganas district of West Bengal houses a number of beautiful temples of which Shyamsundar Mandir deserves special mention. It is a very large “at-chala temple with porch on triple entrance.” A stone plaque on the entrance to the temple states that the temple is renovated by P. C. Robertson who happens to be the manager of Khardah Jute Mills.

END_OF_DOCUMENT_TOKEN_TO_BE_REPLACED

A beautiful temple housing the idols of Nandadulal Jiu and Radharani is situated at a place called Saibon or Saibona in North 24 Parganas district of West Bengal. This is the third Krishna idol after Ballavji of Serampore and Shyamsundarji of Khardah.