“A dolmancha either stands on four columns or four corner wall sections.” These columns are sometimes decorated with intricate terracotta works. Dolmanchas are generally char-chala or four roofed and even pancha-ratna or five pinnacled; but some are also of aatchala type. Dolmanchas are found mainly in the districts of North and

and other places. A dolmancha is situated a little away from the main temple where Lord Krishna is worshipped. On the day of Dolyatra or the festival of colours (full moon day) which normally falls in the month of March or in the Bengali month of Phalgun, the idol of Radha Krishna are taken out from the main temple and placed inside the dolmancha. There a special puja is held at dawn and then dev-dol is performed. I was pretty lucky to witness the Dolyatra of Shyamsundar Jiu in Khardah last year. I got up very early and reached the dolmancha where I found a large number of devotees – both male and female of different age groups eagerly waiting in a queue to offer puja. It was a really a memorable sight to watch.

There are many dolmanchas which has terracotta works on its four pillars and also on the panels. At this picture, you will notice the terracotta work, though some part got damaged due to neglect. The panel depicts pictures from Gosthalila. This beautiful aatchala dolmancha standing on four pillars is placed on a slightly raised platform. It is situated in the temple complex at Rautara in Howrah district dedicated to Damodar Jiu. This temple complex also houses an octagonal rasmancha together with a nahabatkhanal There are many temples where both rasmancha and dolmancha are situated like in Dasghara, Aatpur and Khardah to name a few.

On my recent visit to Joynagar and Baharu in South 24 Parganas, I came across a number of dolmanchas of varying shapes and sizes. In some places pancham dol (fifth day after Dolyatra) is celebrated like in the temple of Radha-Ballav Jiu in Joynagar and in Belur Rasbari in Howrah. The architecture of this dolmancha is unique in the sense that there is a temple in the ground floor, which is in a raised platform with the mancha on the top. Two white elephants adorns the entrance. 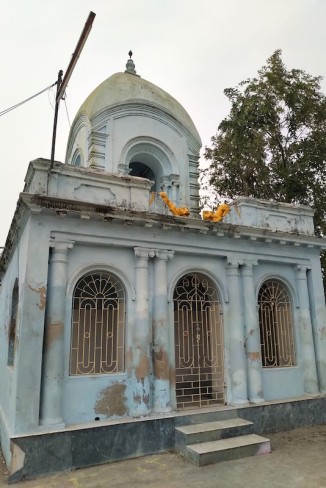 Another dolmancha which deserves mention in Joynagar is dedicated to Radha Shyamsundar Jiu (picture at the top). The mancha, like that of Radha-Ballav Jiu, is a two storied sturcture and really beautiful to look at. The architecture and the frontal structure is spectacular. The front portion of the ground floor is oval in shape. While going down the road to Baharu, I found another dolmancha (picture in the left) in an open space much like that of the twin manchas near Mitra Ganga in Joynagar. At the dolmancha in Baharu, there is a door (presently closed) at the ground floor, through which the devotees will go upstairs and offer puja during the dol festival, when the idols of Radha-Krishna are brought here from the main temple.

A beautiful char-chala dolmancha dedicated to Gopinath Jiu near Gopisagar lake at Dasghara, Hooghly adorns the area. A close look will reveal terracotta works on the pillars as well on the panels; though much of them have been lost. The base of each pillar is also beautiful. The dolmancha is placed on a raised platform.

There are even dolmanchas, which are pancha-ratna with rigded towers like the one in Aatpur in Hooghly dedicated to Radha-Govinda Jiu. Previously, there used to be terracotta works; but very few remains today. The dolmancha is also on a raised platform. The ridged towers remind us of the pancha-ratna temples. The dolmancha is present just outside the temple complex of the famous RadhaGovinda Temple of Aatpur built by Krishnaram Mitra in 1786 A.D.

In one of my tours to Chandannagar in Hooghly district, I was surprised by the existence of a beautiful and well-maintained pancha-ratna dolmancha with riged towers at Narua. The mancha is placed on a higher platform. It is well maintained and terracotta works are present on the= panels. I tried to enquire about the period in which it was built; but in vain as nobody could able to trace its history. But this dolmancha is one of the best found by me. The colour combination also attracts me. There are also presence of tiles on the four pillars. The panels on the sides has beautiful motifs. The riged towers make the make the mancha even more beautiful to look at.

Another charchala dolmancha on a much raised platform is present at Amadpur in Memari in Purba Bardhaman district. This dolmancha is a ridged rekha type on columns just near the Chaudhuri manison. Here on the day of Dolyatra, the idols of Radha-Madhav are taken out from the main temple and placed on the dolmancha. Here devdol is performed first on the early hours of the morning when people give abir or coloured powders to the God and later play Holi. Sweets are also served on this occasion. 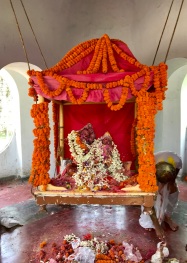 A beautiful hexagonal dolmancha dedicated to Nandadulal Jiu and Radharani is present in Saibon in North 24 Parganas. I was pretty lucky to visit there last year on Dolyatra. A flight of stairs will lead you to the dolmancha. Never I have seen such a different type of architecture. The dolmancha looks like a temple. The mancha was renovated in 1954.

Another beautiful dolmancha with magnificent architecture was spotted by me at my recent visit to Jhikira in Amta-II block of Howrah district. It is two storied structure with the char-chala mancha on the first floor. A ridged tower adorns the mancha. The dolmancha is more or less well maintained.