There are a number of temples rich in terracotta in Amta II block of Howrah district of West Bengal namely in the villages of Jhikira, Rautara and Amragiri. Coming from Howrah, the first village is Amragiri on your right.

A five minute walk from the main road will land you to Dadhimadhav Temple which is a protected heritage monument under Government of West Bengal. A blue noticeboard in the temple courtyard will remind you. This is one of the most well-kept temples in the 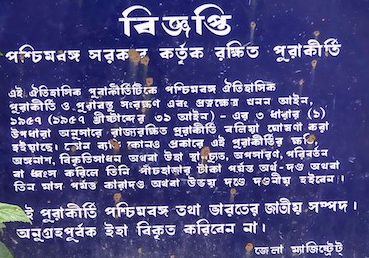 The signboard in the temple courtyard.

region. The south-facing twenty-five feet high temple follows aatchala style with porch on triple entrance. Built by the Roy family in 1686 Sakabda (Baisakh 1171 Bangabda, ie, April-May 1764 according to Gregorian calendar), the principal deity of the temple is Dadhimadhav saalgram sila which is worshipped daily. Like most of the temples of the region, it is placed on a slightly higher pedastal. The three panels has intricate terracotta works and all are intact. That apart there also exist some motifs and designs. The panels depict the exquisite craftsmanship of the then artisans who built this temple.

The panels depict stories from The Ramayana – war scene of Rama and Ravana, Sita in Ashokbon,etc. It has also scenes from Krishnalila. The lower base of the temple has a number of scenes ranging from European ship and sailor on the one hand and hunting scenes on horseback and elephant back and even babus being carried on palanquin. These depict pictures from social life and the advent of the Europeans. There are also idols of Goddess Durga with her entire family. 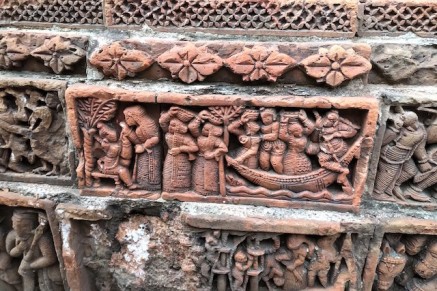 I visited this temple while returning from the village of Jhikira on my return journey. It was past three in the afternoon. The sunlight falling on the panels make the terracotta figurines even more lively. But some panels at the base of the temple got damaged.

There are two entrances – the principal entrance in the south while another in the west which is flanked by the statues of dwarpal (gatekeeper).I have seen the statues of dwarpal in a temple in Kolkata. But predominantly dwarpal are seen in the temples of Howrah and adjoining Hooghly district. The door has got a coat of paint; so like the dwarpal statues on both sides. This entrance is comparatively smaller than the main one; and, to me it is used in rare occasions. The dwarpal statues are placed on a slightly higher pedastal and their hands are criscrossed. It seems that they are exhibiting bravery. The twin statues of dwarpal has received a coat of lime and standing there as if guarding the temple.

The best option is to go by car. The distance is roughly 55 kilometers from Kolkata. A hour-and-a-half journey will land you to Amragiri. Park your car at a suitable place and the best option is to walk on foot to cover the places. Alternately, you can board the bus going to Amragiri from Howrah bus stand and you will reach there roughly in two hours time. Or, you may even take the local train to Amta. The time taken is roughly one hour forty five minutes to reach Amta. From there you have to arrange your suitable means of transport to reach Amragiri. The distance between Amta station to Amragiri is roughly twelve killometers.

I want to covey my special thanks to Sri Amitabha Gupta