When we speak of terracotta temples, the first thing that comes to our mind is Bishnupur in Bankura district of West Bengal. But terracotta temples are spread in different districts of the state and, in particular, in many areas of Bankura district namely Kotulpur, Gokulnagar, Joypur, Hadal Narayanpur to name a few. The twin villages of Hadal Narayanpur is located about five kilometres from the nearest railway station Dhagaria in the Bankura Damodar Railway (BDR) of South-Eastern section of the Indian Railways. It is situated on the southern banks of Bodai river, a tributary of River Damodar.

There are a number of temples there along with a beautiful seventeen pinnacled rasmancha belonging to Mondal family which is classified into three parts – baro taraf; mejo taraf and choto taraf.

Apart from the terracotta temples belonging to Mondal family, there is one east-facing dalan temple on the left dedicated to Bramhani Devi. The 5′ 10″ idol made from kostipathar (touchstone) is pretty old and dates back to Pal dynasty. According to sources, the first resident of this village is one ‘Murokata’ Chakraborty.

It was stated that her widow daughter in a dream first discovered this idol from the nearby Damodar river and when the idol was taken out, the level of the water in the mighty Damodar river was drastically reduced so much so that it came down to knee deep water.

The area got its prominence with the arrival of Muchiram Ghosh from Nilpur during the time of Malla king Gopal (1720-1752). Later they received the title of “Mandal”. It was from then onwards they became the zamindars of that area and they set up temples – some of which are rich in terracotta and are unique. They are divided into baro, mejo and choto taraf. Each has a number of temples which bear the testimony of that period. Some of the terracotta decorations are really beautiful and one simply will be spellbound by its sheer beauty. I visited it on December 2019 and was completely mesmerised by the beauty.

I first visited Baro taraf of Mandal family and I was greeted by a double-storied (40 feet) seventeen pinnacled octagonal rasmancha. The saptadas-ratna rasmancha with rekha turrets was constructed in 1854. The rasmancha is unique in the sense that each corner of it has sculptures depicting Gaja Lakshmi, Ram Sita, Krishna Radhika, Anantasayan Bishnu, Gostho Lila, Mahisasuramardini Durga, Marriage of Shiva, Shiva-Nandi-Bringhi. Each of them has artistic excellence; but due to sheer neglect some of the sculptures got broken. There was an old custom that during the Rash festival in the month of November all the Shalagramshilas of the village were kept here for three days. The rasmancha is placed on a higher pedastal.

In the compound of baro taraf, there is a big double-storied yellow-coloured house belonging to the Mandals. The marvellous architecture along with its semi-circular arch over each window is striking. One will also witness the European influence.

On the extreme right side I noticed a rath chariot made of bell metal inside an enclosure. The chariot was made by Shivnarayan Mandal in 1854. The year also coincides with the date of the construction of the seventeen-pinnacled rasmancha. The nine-pinnacled ten feet chariot had many images on it starting from Dasavatar to the mythological and even pictures from social life. Entering inside the mansion of baro taraf, I found a big thakurdalan. I was told that Mandal family celebrates Durga puja at this dalan every year and during that festive period this area got crowded. It was more or less well maintained. I was told that Durga puja here is pretty famous. The thakurdalan reminds us of the pomp and granduer in which the puja is celebrated.

I was taken inside the house by the caretaker and he showed us the south-facing pancha ratna (five pinnacled) Radha Damodar temple. The 30 feet temple was recently coloured with pink. From the foundation plaque it is evident that it was built in 1728 Sakabda, which, according to Gregorian calendar dates back to 1806. Like most of the pancharatna temples, it has a triple arched architecture. Though this temple does not have much terracotta; but still then it is well maintained. There are two small temples dedicated to Lord Shiva in the same compound. 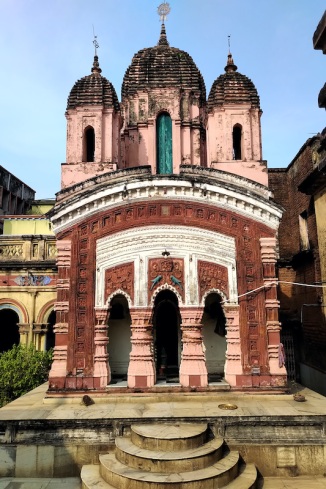 After visiting Radha Damodar temple, my next destination was the mejo taraf. There I found another nabaratna Radha Damodar temple; but here it is east-facing. A little higher than the temple of the baro taraf, it is rich in terracotta and has a triple arched entrance. There are growths of vegetation here and there in the temple walls.

Apart from stories from Ramayana and Mahabharat, it also has Dasavatar, Krishnalila, Ananta Shayan Vishnu apart from the mythological and pictures from social life.

The terracotta panels of this temple depicts exquisite craftsmanship of the artisans of that age. There developed cracks in some panels while a part of it was coloured. But apart from that the terracotta panels are one of the best that I have ever seen.

My last destination in Hadal Narayanpur is the Mondal mansion of choto taraf. I entered choto taraf through a triangular-shaped entrance which has twin lion statues facing each other at the top. The building is red in colour. As I entered I found a thakurdalan which one has to cross in order to see the south-facing nabaratna temple which looks like a church. A flight of semi circular stairs will lead you to the temple.

Like other nabaratna temples, it has a triple-arched entrance and the panels are rich in terracotta works. The 35 feet tall temple has a staircase by the side of the wall on the western side. The temple has undergone renovation including fresh coat of paint.

The central panel displayed a scene from The Mahabharat where Arjun was targetting the fish eye in Draupadi’s swayambar shava. The panels have survived the taste of time. Almost all the panels in the front are intact.

There are scenes from Krishnalila, Gour Netai, mythological characters and social scenes. Beautiful floral motifs are displayed at the bottom of the four front pillars. According to family sources, this nabaratna temple of choto taraf was built nearly 210 years by Baburam Mondal for his minor son Ganga Gobinda. Surprisingly this magnificent temple is devoid of any foundation plaque. 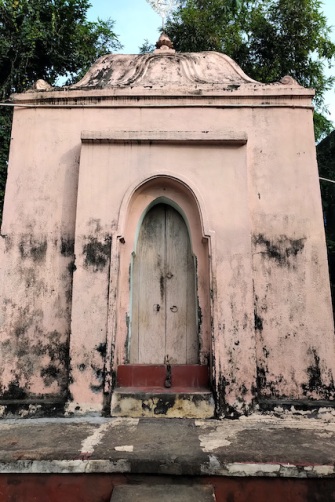 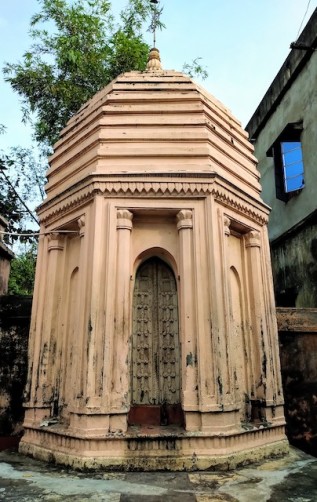 In the same compound, where the nabaratna temple stands, I noticed two temples of different architecture with different colours. I did not notice any foundation plaque and there was none to enquire about these temples as it was afternoon. The temple on the right is octagonal in shape and the door was closed for which I could not see the deity inside. I assume that either these two temples were built during the same time or may be later; but both are devoid of any terracotta works.

Just outside the premises of choto taraf, I noticed a dilapidated nabaratna temple dedicated to Damodar (Shalagramshila). The temple is roughly 25 feet in height and has a triple arched entrance. The front portion has terracotta works ranging from Anantasayane Vishnu, Bhisma on a bed of arrows (Bhimser sarasajja) and war scenes. There is a growth of vegetation at the top which must have to be cleared soon in order to save this temple from further decay.

How to go there:

It can be a single-day trip provided if it well-planned and if you go by car. But it will be rather hectic. The best time to visit is from November to mid-March. There is no boarding facility at Hadal Narayanpur. Take lunch either at Barddhaman or you may have to carry it from home as you will hardly find any restaurants or eateries there. Don’t forget to carry water with you.

My sincerest thanks to Sri Amitabha Gupta.