Manchas are of three types – rasmancha, dolmancha and tulsimancha. A rasmancha (a temple-like structure generally octagonal in shape with the sides open and situated on a raised-platform) is the largest among the three. It was very common in the nineteenth century Bengal. The rasmancha is normally smaller in size than the main temple where the Radha Krishna deities reside throughout the year. The main purpose of building the rasmancha is to enable the people to witness the deities (here Radha Krishna) from all the sides on a special occasion (Rashyatra).

The rasmancha is adjacent to the temple where Lord Krishna is worshipped. The rasmancha “is built up on eight walls with archway openings”. The walls are decorated with either intricate terracotta works or simply with floral motifs. Some rasmanchas have even plaster work on its walls. A rasmancha is used during the Rash festival on the auspicious day of Kartick purnima held in the month of November every year.

In most of the cases rasmanchas are pinnacled – “eight turrets round a large central tower in the case of a single story, making nine altogether.” Now coming to these turrets – they are “either miniature rekha deuls,” or something like a “bulging vase design capped by an inverted flower” or like a “garlic bulb” (rasun chura).

The rasmancha and the beautiful nine-pinnacled temple dedicated to Shri Shri Radharaman Jiu of Belur Rasbari in Howrah district was founded by Late Purna Chandra Dawn, the eldest son of Late Shiv Krishna Dawn on 21st Jaistha, 1297 (June, 1890). The rasmancha of Belur Rasbari has undergone renovation. It is completely circular in shape with beautiful designs at the top. Here the beauty lies in its staircase. I do not know whether this type of unique rasmancha exists in the entire West Bengal.

But the rasmancha which drew my attention is that of Baro taraf of Mondal family of Hadal Narayanpur in Bankura district. It is a double-storied seventeen pinnacled ramancha with rekha turrets placed on a higher pedastal constructed in 1854. The rasmancha is unique in the sense that each corner of it has sculptures depicting Gaja Lakshmi, Ram Sita, Krishna Radhika, Anantasayan Bishnu, Gostho Lila, Mahisasuramardini Durga, Marriage of Shiva, Shiva-Nandi-Bringhi. Each of them has artistic excellence; but due to neglect some of the sculptures got broken. There was an old custom that during the Rashyatra in November every year all the Shalagramshilas of the village were kept here for three days.I am sharing here some of the sculpture work on the wall of the rasmancha for the readers’ convenience. See, how beautiful the work of art is in those days. 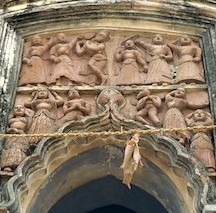 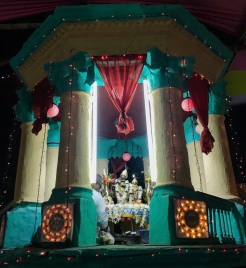 This rasmancha along with the temple built by Preo Nath Ghosh in Howrah in the year 1897. The rasmancha here is two-storied and I have been informed that one can adjust the height of this mancha. It is also unique in its nature.

It may also be with straight cornices and of nava-ratna style with vase turrets like the one in Bankura.

The picture of the rasmancha in the middle  is currently abandoned. When I visited this area two years back, I was told by the locals that this structure was infested with snakes. I didn’t enquire whether the snakes are poisonous.

Rasmanchas are mainly found in the districts of Howrah, Hooghly, Bankura, East Midnapore, North and South 24 Parganas, Purba Bardhaman and even in Kolkata. Strange to hear that rasmanchas exist in Kolkata. Previously there were four such structures of which two still remains and reminds us of the bygone days – one at Baghbazar and the other at Cossipore. Both of them are more than 250 years old.

The rasmancha of Radhakanta Temple of Mondal Temple Lane collapsed more than ten years ago. Here I am sharing the photograph of Radhakanta Temple along with rasmancha taken by Mr. Brian Paul Bach According to the writings of the writers of old Calcutta, there existed a rasmancha in Lalbazar area which belonged to Sabarna Roychowdhuris.

In this respect, I would like to state just crossing Adi Ganga, on the side of Tollygunge, there exist Baro Rasbari and Choto Rashbari founded by Mondal zamindars. During rashyatra, I found the idols of Radha-Krishna being placed on a wooden rasmancha which also deserves mention, specially the one at Choto Rasbari, where the festival is held in the Bengali month of Chaitra (March-April), popularly known as Chaitrer Rash. Here the mancha is build of mahogony wood and there existed rare pictures of Krishnalila. 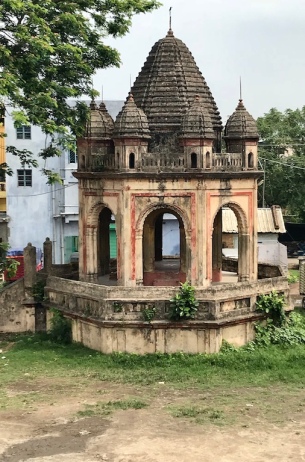 The main festival of Radhaballav Temple in Serampore is Rashyatra. An octagonal rasmancha dedicated to Radhaballavji is situated a little away from the temple by the side of the Ganges. The rasmancha, though renovated has beautiful floral motifs. It is placed on a higher pedastal and a flight of stairs will lead you to the inner sanctum of the mancha. There are eight domes on the eight walls.

The above picture of Dasghara shows that the turrets of this rasmancha which is by the side of Gopisagar Lake is of bell type. Rasmanchas are generally octagonal with (i) curved cornices and of nava-ratna type with rekha turrets like the one at Joypur in Bankura district and also one can see here the saptadasa-ratna (seventeen pinnacled) rasmancha with rekha turrets. 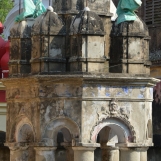 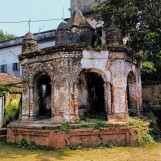 The first three ramanchas in the above picture belong to Jhikira and the last one in Rautara in Amta-II block of Howrah district.

There are a number of rasmanchas which do not follow any particular architecture like the one in Khardah which is of “anomalous low design” and octagonal. It has seventeen turrets following 8-8-1 style. The beauty of this rasmancha is with its unique staircase. The first turrets are “at the corner of the plinth, and eight more at the corners of the next platform, clustering round a large central kiosk.” “Khardah is a favourite place of pilgrimmage for Vaishnavas” and the disciples visit it during the Rash fetival and it finds mention in Bengal District Gazetteer 24 Parganas by L.S.S.O’Malley (1914). 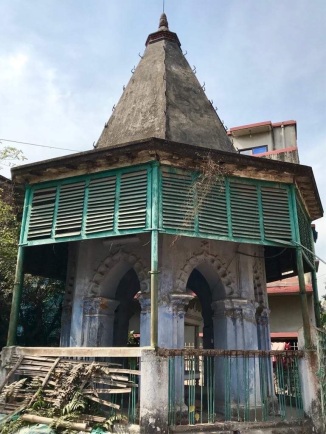 There are two other rasmanchas in Khardah. The picture in the left was founded by Nitya Kali Dasi of Simulia, Kolkata on 1st Phalgun, 1317 (which according to Gregorian calendar dates back to mid-February, 1910). Presently, it is abandoned. The picture on the right belongs to the rasmancha of Gopinath Temple. Both are unique and does not follow any definite architecture.

There is another rasmancha present at the Rajbari complex in Kalna, Purba Barddhaman which is also unique. It is built on the design of two consentric ring and the turret is dome-shaped. 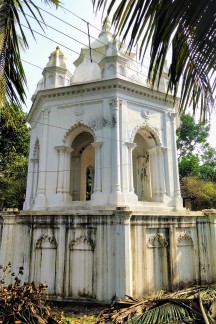 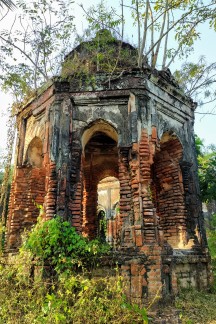 I have also come across a number of rasmanchas following different types of architecture in South 24 Parganas district. The first one at Gumukhberia in Kulpi block is of nabaratna style. The second is at Kamarpole near Sarisha in Diamond Harbour II block is of octagonal style. Here few floral motifs can still be seen. The last one is also octagonal at Bhurirpukur in Rajpur Sonarpur. Here stucco works are prevalent. Both the second and third rasmanchas are now abandoned.

The Rasmancha, Bishnupur was built by 49th Malla King Bir Hambir roughly in 1600 A.D. It is a protected monument under A.S.I. Kolkata Circle.