There are a number of temples in Kalighat area of South Kolkata of which Jora (twin) Shiv Mandir of 60, Iswar Ganguly Street, Kolkata – 700026 is pretty old. There are two temples – both of Bengal’s traditional aatchala style built possibly in the late eighteenth century by Baidyanath Halder.

The two temples are dedicated to Sri Sri Bhubaneswar and Sri Sri Rameswar. There is a single entrance through which one can enter the temple complex. The temples are in a raised platform. The temples were built by local masons with very thin bricks and tiles were used and that is prevalent on the two sides of the temple. Floral motifs are used and terracotta works might be there, but currently they are not visible as partial patch works were being done as part of renovation work. The temples are pretty big.

I have been told by Sri Abhishek Halder that the Shiva lingas were brought from Orissa via Adi Ganga through boat. During those days Adi Ganga was quite navigable. The founder of the temple used to bathe the Shiv lingas in the morning with the water of the Ganges. Previously there exisited a courtyard on the front and back of the temple of the same size; but a portion of the courtyard in the front of the temples still remains. 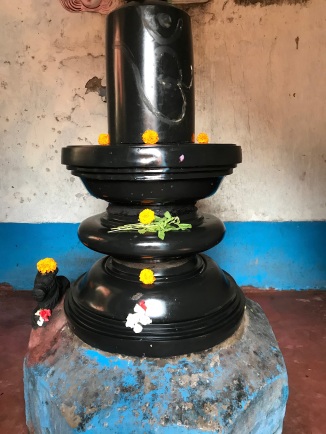 Daily worship is performed twice a day – in the morning and in the evening. Sivaratri is the main festival here and during that day the temple is decorated and a large number of devotees offer puja.

One can see the top portion of the Kalighat Kali Temple from Shiv mandir. Each temple has only one door and a window. The two windows are facing each other. The temple dedicated to Sri Sri Rameswar is comparatively bigger in area as far the temple sanctum is concerned.