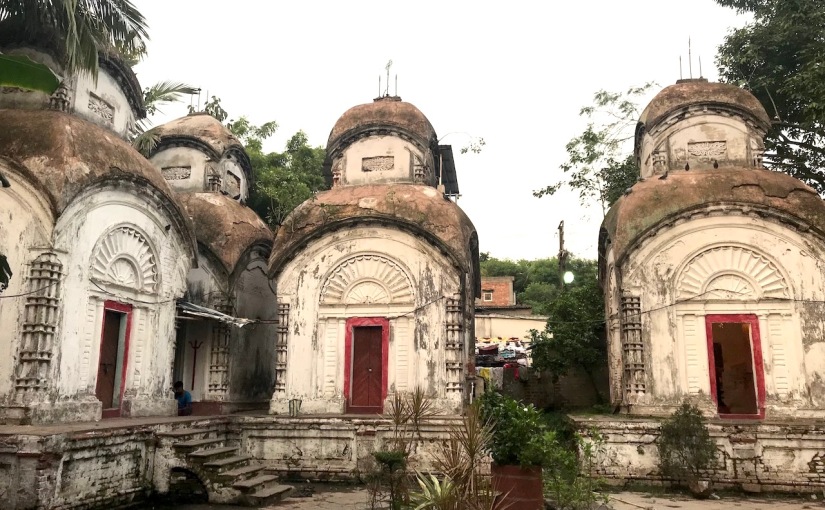 Kamarghat Dwadosh (twelve) Shiva Temples of Prankrishna Chandra Lane, Kolkata was founded by Nilmani Chandra in the Bengali year 1259 which, according to Gregorian calendar dates back to 1852. The locals call this as ‘Baro Shiv Mandir‘.

If you are coming from Tollygunge Phari to New Alipore just after crossing the Tollygunge Bridge over Adi Ganga take the left road which is B. L. Saha Road. Go straight for about five minutes and ask anybody about this temple and then will show you. Or you can simply look for Prankrishna Chandra Lane on your left. Go straight through this lane and towards the end of the lane you will come across Kamarghat Dwadosh Shiv Mandir on your right. Alternately, just after half crossing the Tollygunge Bridge, you will find that there is a short staircase on your left. Walk down through it and you will find Canal Road just by the side of Adi Ganga. Go straight through this road and after walking for about five minutes you will find this temple.

The temples are situated on a raised platform within a square shaped paved courtyard. The temples follow Bengal’s traditional aatchala (eight roofed) style. On entering the courtyard, the first right hand temple is known by the name of “Buro Shiv Mandir“. Worship is performed here on a daily basis. But on every Mondays there is an increase in worshippers. During Shiva Ratri and Nil Puja this place is crowded. The Shiva lingas which were brought from Kanthi are made of kosthi pathar (touch stone) and they are cleaned regularly. Beside the Shiva linga there is a small statue of Nandi, the bull.

According to Sri Panchu Chandra, there existed a ghat with a flight of stairs by the side of Adi Ganga. The ghat had rooms on both sides. The pillars on which the ghat rested had collapsed almost four decades ago. He said that there is a foundation plaque on the ghat and the dates that we now see in the temple doesn’t exist at that time. They were written much later possibly after the collapse of the ghat. He further said that they were orginally residents of Kamarpara of Behala. His great grandfather Nilmoni Chandra came here and brought this land and founded this Shiv Mandir.

There are a number of old temples on both the sides of Adi Ganga which were mostly built during the nineteenth century. I visited Dwadosh Shiv Mandir a number of times and I found a large flock of pigeons in the temple courtyard. Another thing I would mention, on one occasion, when I visited this temple on a afternoon just after the high tide, I found tide water from Adi Ganga in the square courtyard.