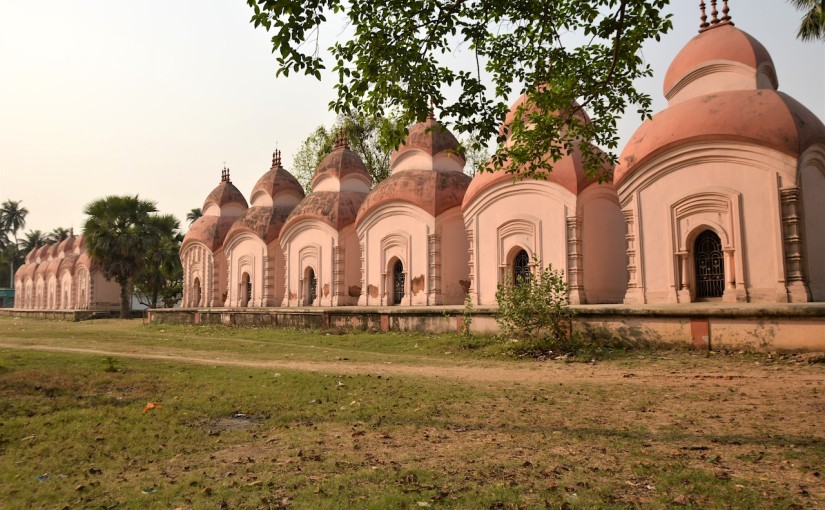 Baksa, a village in Chanditala II block of Serampore subdivision of Hooghly district has a number of temples from aatchala to nabaratna and they are more two hundred years old.

On a March afternoon this year, I visited Baksa to witness the temples. It was said that in the sixteenth century when River Saraswati was navigable the Portuguese had built a small harbour here. Walking through the village road I came across a big open space in the right known as Baksa baro mandir tala. Yes, you are right there are a total of twelve aatchala Shiva temples arranged in two parts containing six in number. All the temples are placed on a slightly higher platform with a row of stairs at the end.

The aatchala temples are built by Dewan Bhabani Charan Mitra in 1789. All the temples are of the same height but one thing which I noticed is the sixth temple (see Top Left Picture) of the first part and the seventh temple (or the first temple of the second part) (see Top Right) are different from the others as far as the outer frontal decorations are concerned. There I noticed a little bit of stucco work on the top but no terracotta decoration. The shiva lingam is made of black stone and daily worship is performed here. I was told that a fair was held every year on the last day of the Bengali year (Chaitra Sankranti). It was rather difficult to take a snap of the twelve temples all in one single frame unless you have a wide angle lens.

Leaving the Baro Mandir tala on the right if you walk for about five minutes you will see two temples of aatachala style in one block and another temple standing alone. As it was afternoon, I could not take the photograph of the deity inside. The temple which is standing alone might be a Shiva temple. Its condition is not good and requires urgent restoration to prevent it from further decay. On the other hand, the other two temples are more or less in good condition and it seems, that they have undergone restoration but has not received a coat of paint. All the temples are on a raised platform.

While returning I enquired about Raghunath Jiu Temple and one of the local people showed me the way. It is diagonally opposite to Baro Mandir tala and roughly 300 metres from there. But it is difficult to locate it as it is situated inside a lane. This is one of the prominent temples of the area. This nabaratna (nine pinnacled) temple is dedicated to Raghunath Jiu. Built in 1792 by Bhrukutram Mitra, this east-facing temple is on a raised platform. But when I visited the same, the temple was undergoing renovation which you see from the photo. It happened to me that previously the temple has terracotta decorations but none remains except some at the top. Like other temples, this nabaratna temple has a triple arched entrance.

To visit the temples of Baksa:

The best way to visit is by train. The nearest station is Janai Road in Howrah-Barddhaman chord line. From Janai Road station take any auto going to Masat and get down at Baksa Shastitala. From there you have to walk through the village road to see the temples.

Alternately, there is a direct train from Sealdah known as Sealdah-Baruipara local in the afternoon. You may board it and get down at Janai Road station.