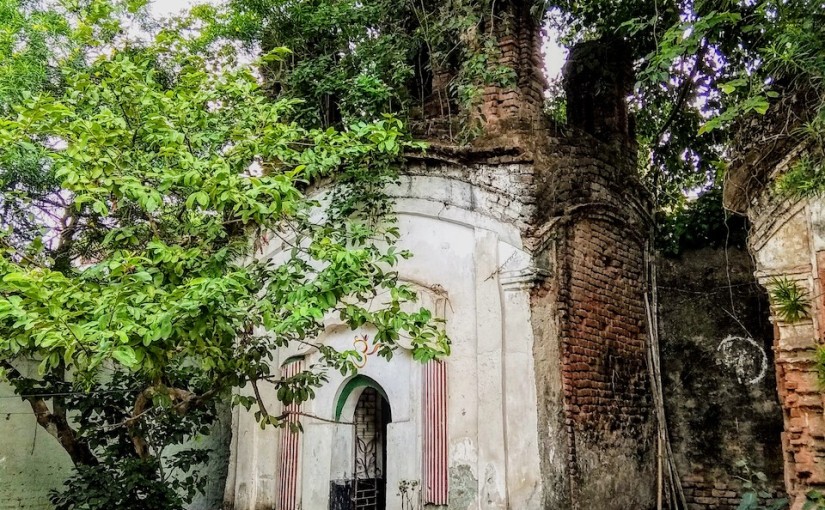 Baro Rasbari of 78, Tollygunge Road, Kolkata consists of two temple complexes – eleven aatchala Shiv Mandir together with a pancharatna temple in one big courtyard completed in the second decade of the nineteenth century and a big aatchala temple dedicated to Madan Mohan completed in 1834. The entire temple complex of Baro Rasbari is a Grade – I heritage structure. It finds mention in the Graded List of Heritage Buildings (Volume XI) of Kolkata Muncipal Corporation.

The Mondals were the zamindars of Bawali (in South 24 Parganas district), a place situated approximately 27 kms from Tollygunge. They were originally the residents of Basantapur, a place in Nadia district. According to Sri Arun Kumar Mondal, the Mondal lineage was founded by Basudev Ram towards the close of the sixteenth century. The title of Mondal was given during the time of Shovaram, who was the grandson of Basudev Ram. The Mondal zamindari system was founded during the time of Shovaram.

The Mondals had a number of temples in Bawali . But apart from Bawali, the Mondals had a number of temples built in Tollygunge area by the side of Adi Ganga, which one time served as a major pilgrim route. The first such temple, a 110 feet high Radhakanta Temple of nabaratna type was built by Ramnath Mondal. The presiding deity here is Radhakanta, made of black stone. The construction work began in 1796 A.D and completed in 1807. Ramnath Mondal was the eight generation from Basudev Ram.

On the other side of Adi Ganga in the modern day Tollygunge area, a beautiful pancharatna temple dedicated to Gobindaji was built by Manik Mondal, brother of Ramnath Mondal. The construction work of this temple began on 16th Chaitra, 1216 as per the Bengali calendar (according to Gregorian calendar it corresponds to end of March 1809) and it took three years to complete. The completion date was 31st Baisakh, 1219, ie, 15th May, 1812. Therefore it is clear that Manik Mondal started building this pancharatna temple two years after his elder brother Ramnath Mondal finished Radhakanta Temple.

The eleven aatchala temples arranged on three sides of an enclosed courtyard in the Baro Rasbari complex were built during the same time. Manik Mondal was also famous for building a very big chariot, which, one time, served as one of the tallest chariots of South Bengal.The pancharatna temple built by Manik Mondal was dedicated to Gobindaji. It was one of the oldest temples of that area. There also existed a charchala dolmancha on four columns raised on a mound which was somewhat separated from the cluster of temples, but unfortunately it no longer exists now.. It shows that Dolyatra was a popular festival here and the deities were placed on a swing inside the Dolmancha. This pancharatna temple has ridged rekha turrets with a single entrance placed on a raised platform. This is because of the fact that as this temple was by the side of Adi Ganga, there used to be a high tide, and for which to prevent the tide water from entering the temple premises, it was raised. Not only this temple but also the other Shiva temples are built on a raised platform. You can find this pancharatna temple on the extreme right hand corner of the compound.

I first visited this temple complex in the late eighties and, during that time it was more or less in a good shape. My interest about this temple first arises when I find why is there one pancharatna temple when there are so many aatchala temples. I tried to trace the history of this temple. In the adjoining big aatchala temple built by Uday Narayan Mondal, son of Manik Mondal, dedicated to Madanmohanji during this year’s Dolyatra I found all the idols were brought out of the temple sanctum and placed on a raised platform and devotees were offering their pujas. I found both Gobindaji along with two Radhikas and Madanmohanji with Radha. Later I was told by Shri Pankaj Chakraborty, head priest of Choto Rabari that the pancharatna temple in the enclosed courtyard of Baro Rasbari was dedicated to Gobindaji. There is a history connected with this temple.

It was more than hundred years ago when Gobindaji was worshipped in the pancharatna temple. But one day the radhika of Gobindaji was stolen. Soon after the incident search went on but in vain. Radha could not be traced. Hence the then zamindars gave orders to prepare another radhika just like the one which was stolen from the temple. Accordingly a new Radha was prepared from astodhatu (an alloy of eight metals) and the same was worshipped with Gobindaji which is made of kasthipathar or touchstone. Later a strange incident happened. The person who has stolen the previous radhika suddenly became blind. He was very much scared and he disclosed the entire incident to the then zamindars. And he even told the spot where he had kept the stolen radhika. People accompanying him rescued the radhika from that particular place and then the previous radhika was worshipped along with the one newly prepared with Gobindaji in the temple. Hence there are two radhikas.

One striking thing told to me by Shri Pankaj Chakraborty while narrating the entire history of this once beautiful pancharatna temple is that both the Radhikas are so identical that only a selected few can identify them. Since then Gobindaji along with the radhikas are worshipped in big aatchala temple dedicated to Madan Mohanji. The pancharatna temple from then onwards is devoid of any deities and, a long time has passed, and now it has become abandoned. Another striking feature is the sila of Lakshmi Janardan which is worshipped along with Gobindaji. This is the history of Radha Gobinda Temple which at a time was one of the oldest temples of Tollygunge area of Calcutta (now Kolkata) and now in complete oblivion.