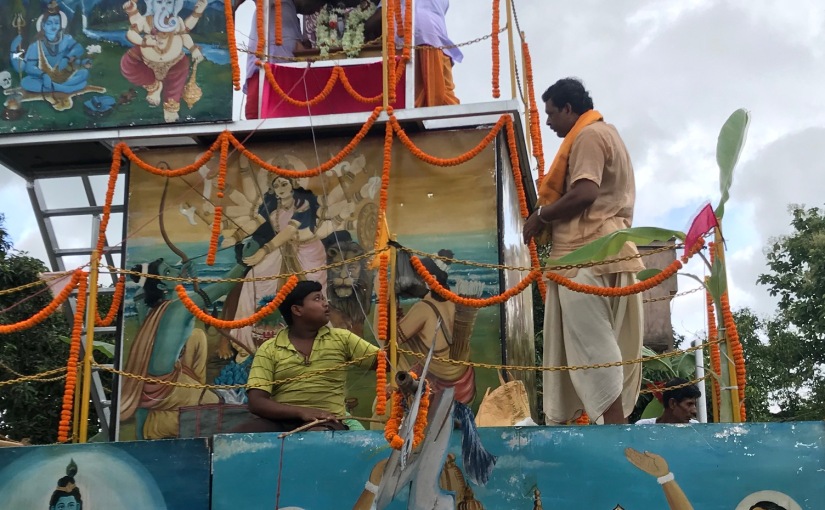 The village of Amadpur in Purba Bardhaman district of West Bengal is well known for Rathayatra or chariot festival.

I was lucky to witness the same a couple of years back. The festival attracts a large number of people. The family deity of the Chaudhuris is Radha Madhav who is worshipped in an old aatchala temple near Chaudhuri Mansion.

I reached Amadpur at around eleven in the morning and found that preparations for rathayatra was going on in full swing. The chariot was waiting and it was beautifully decorated. I met there Shri Shiladitya Chaudhuri and, from whom I came to know that the present chariot was being used since 2001 onwards. He also informed me that earlier there was thirteen pinnacled (tero chura) rath. I found also a number of people from Kolkata who came there to witness this grand event.

The idols of Radha Madhav are first worshipped. It was a beautiful thing to watch when the idols of Radha Madhav were coming from the temple to be placed inside the chariot. I heard the dhakis beating the dhaks, women blowing the conch shell. It was pretty hot that day but people were eagerly waiting for the idols to arrive. There were also shehnai players playing their instruments making the ambience truly festive.

After the idols of Radha Madhav were placed inside the chariot, people who assembled there including me also got hold of the rope and the rath began to move.

One thing I would like to mention here is that the Chaudhuris celebrate their Durga Puja in a grand way at Durga Bari which houses the nat mandir of the family built in the year 1662. Here apart from Durga puja, Kali puja, Kartick puja, Rashyatra and Saraswati puja are also held.

The ritual of collecting the mud which clings to the wheels of the chariot are used to begin making the frame for the Durga idol. At Durga Bari, a small puja is held in front of the kathamo (frame) of the Durga idol.

The added attraction is the fair (Rather mela) in the evening. The fair is mainly rural. People of different age groups crowd the area. One will not only find sweetmeat shops but shops selling day-to-day commodities.

To visit Amadpur, take any local train from Howrah going to Memari. From the station take any auto or toto and visit the village of Amadpur which is roughly four kilometres from Memari station.