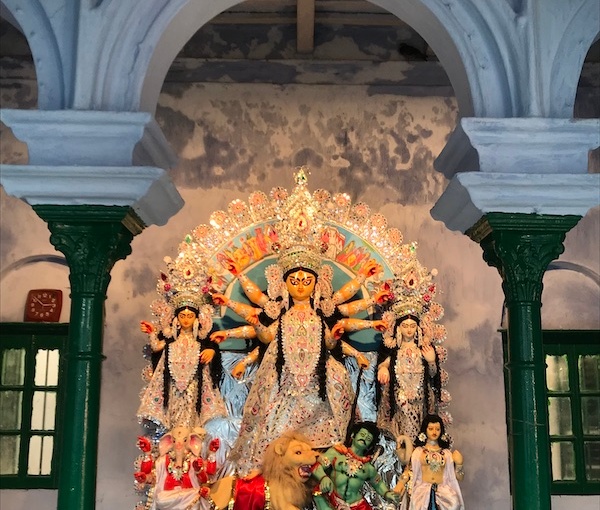 According to Sri Suniti Ganguly, Vice-President of Bally Chaitalpara Buri Maar Aatchala Puja Committee, this puja dates back to nearly 400 years and was started during the reign of Mughal Emperor Shah Jahan. Acutally this puja was a household puja but now it has been taken over by the puja committee. This puja is named as Buri Maar puja only because of its age; it started nearly four centuries back.

Here the structure of the goddess was worshipped (kathamo puja) on the day of Janmastami. This puja is a nine day affair, starting from Pratipad (the day after Mahalaya) and continued till the day of Nabami. On the day of Panchami, Goddess Durga along with her children were adorned with gold and silver ornaments and Maa Durga puts on her Benarasi saree. Here the colour of the lion is white and it looks like a horse. ‘Nabapatrika’, which is normally bathed and worshipped in the Ganges, is worshipped in the temple premises. Kumari puja is held in Saptami. The girl who will be Kumari has to follow a stringent routine from the first day till Sasthi and she is offered bhog in the temple and, that too completely vegetarian. Here lies the uniqueness. Another thing to note here is Kamya Puja which takes place on Mahastami. The devotees offered saree, altaa, vermilion (sindur) and sweets to the goddess. Many people came here to offer puspanjali on Astami and the temple compound gets crowded. Earlier there was a practice of animal sacrifice but now that is stopped, and, instead vegetables are offered. The protima is immersed on the day of Dasami, marking the end of the festival.

Kedar Bhavan of 95, Shantiram Rasta, Bally is situated oppostite to Bally Police Station. The puja here started in the year 1878; though puja was stopped for two to three years prior to 1878. The puja was held for fifteen to seventeen years in a separate house before 1878. The puja in Kedar Bhavan is going on uninterrupted since 1878. The family during those days had a flourishing business and amassed huge fortune. Most of the development work in Bally was sponsored by them including Bally public library of 1885; Bally Athletic Club of 1888 (erstwhile known by the names of Raja Club and then as Wellington Club) and Bally Muncipality.

The protima is basically ekchala and puja is performed according to Vaisnav practice. Dhuno porana is held in Astami and the ladies of the household takes part in it. Unlike other bonedi families, Kumari puja is held on Saptami, Astami and Nabami. The kathamo puja takes place on Janmastami and one type of special wood known as garan kath is used in the three goddesses from neck to head. According to Supriyo Mukherjee, family member, some portion of the original kathamo (structure) remains. Here lies the uniqueness.

The Durga Puja of Banerjee Bari of 8, Shantiram Rasta, Bally was started by Jagat Chandra Bandopadhyay 153 years back. He started his profession as a lawyer and he used to go regularly High Court in Calcutta from the erstwhile Bally gram (village). His two sons were also lawyers but special credit goes to Ranjit Kumar Banerjee during whose time the family attained new heights. Jagat Chandra Banerjee and Krishnomohan Banerjee were Chairman of erstwhile Bally Municipality.

The thakurdalan is beautiful, and on the occasion of the puja, it has got a fresh coat and one will find the puja-like atmosphere. The thakurdalan has a metal lion on the top. After the demise of Ranjit Kumar Banerjee, his two sons Ashok Banerjee and Debmalya Banerjee are continuing the puja with great pomp and splendour.

Goswami Bari of 27, Goswami Para Road, Bally is very old. Earlier the puja was held and hogla leaves are used. The kathamo puja was held in the tithi of Sukla Ditiya in the Bengali month of Aashar (June-July). The puja here is held for roughly more than two centuries. Earlier the puja was held not in protima but in ghat. The thakurdalan is unique. The house was visited by Iswarchandra Vidyasagar on a number of occasions. At one time toll (one form of school) existed here. According to Sri Joydeb Goswami, the family was earlier known by Chatterjees. They got this surname from the son (Birbhadra) of the elder brother of Chaitanyadeb, Nityananda Mahaprabhu. The surname of Goswami was first given to Chandidas Chatterjee.

The puja is held according to Kalika Puran As no sacrifice is performed here, though sacrfice is an integral part of Shakti puja, brass glasses are filled with cocunut water and ikhu rash and panch karai are immersed. Dhuno porana is performed on the day of Astami. Kumari Puja was held on Nabami.

There is also a barochala (twelve roofed) Shiv Mandir just opposite to the house and Shiva lingam is worshipped on a daily basis. There is a harishaba close to the house where Basanti Puja is very famous. Jagatdhatri Puja is also held in there.

The Durga Puja of Ghosh Bari of Tarkasiddhanta Lane, Bally started nearly three hundred years ago by Haribol Ghosh, though the puja was held in ghat for two or three years and that too during the early days of the puja. Maa Durga is worshipped according to Sakta practice as vegetable sacrifice is held in the days of Saptami, Astami and Nabami. Kumari Puja on Astami and Dhuno porana on Nabami are things to watch. This puja is one of the oldest family puja of Bally. 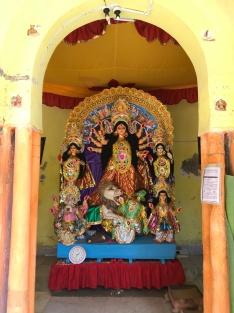 Mishra Bari of Dewangazi Road, Bally is celebrating Durga Puja since 1910. This year the puja falls at 108 years. Both Kumari Puja and Dhuno Porano are held on the day of Astami. The thakurdalan looks old and when I visited it this year on Sasthi, I found squirrels and different kinds of birds including doves were present in the courtyard. According to a lady member of the family, I came to know that there is a big bhog ghar and daily during the days of the puja lot of bhog is prepared and offered to the goddess. The prerequisite for preparing the bhog is one should be married and must have taken diksha. There is one strange thing here – a family member must offer blood (however little it might be) from his chest and offer it through belpata (a special type of three leaves in a Y-fashion) to the goddess.

The puja of Bandopadhyay family of 187/1, Shree Ram Dhang Road, Salkia, Howrah started way back in 1774 by Radha Mohan Bandopadhyay. But the family attained prosperity during the time of Rashik Krishna Bandopadhyay.

It was said that previously Salkia bazaar was owned by Bandopadhays. They even had a ghat, where the protima is immersed on the day of Dasami. The puja is currently being looked after by Susmit Bandopadhyay. The ritual of dhuno Porana is observed by the family on Astami. Earlier animal sacrifice was performed; but now it has been stopped and instead vegetables are offered for sacrifice. The palatial house along with thakurdalan is pretty old and one can witness the caste iron spiral staircase inside.

The Ata house is located almost opposite to Salkia house at 142/8/1, Shib Gopal Banerjee Lane, Salkia. The puja is being celebrated for about two centuries. The idol is traditional ekchala with Dhaker saaj. The thakurdalan is quite big and the green coloured pilllars of the dalan are made of cast iron. The thakurdalan is situated adjacent to the house.

This puja was held at 1, Khirode Chandra Ghosh Road (Watkins Lane), Howrah by Madhav Chandra Ghosh 219 years back, though this house along with thakurdalan is almost three hundred old. It is the oldest Durga Puja in North Howrah. When the puja was first started here Madhav Chandra was just sixteen years old. According to the Subhojit Ghosh this year a theme has been adopted and that is akal bodhan and it has been beautifully depicted through pictures in the three sides of the dalan.

According to Shri Ghosh, the chalchitra of Maa Durga showcases the scenario from Chandi Puran and Bishnu Puran. The unique thing here is the Chandipath and Gitapath starts here a week ago from the puja. The Goddess is the replica of life-like individual. The throne where Goddess sits is made of silver. All the weapons are either made of gold or silver. Like the other bonedi families, Kumari puja and Dhuno porano rituals are celebrated here. Actually two kumaris are worshipped. Another thing to note is the cultural programme. During the days of the puja different programmes are held. Many lost cultural activities like Baul gaan and kabi gaaner larai are held here and it attracted a huge number of spectators. Many famous persons including Deshbandhu Chittaranjan Das, Birenda Krishna Bhadra and Amjad Ali Khan to name a few have visited this house.

I would like to thank to Sri Amal Coomar, Sri Joydeb Goswami, Smt. Ashoka Ganguly and Sri Samar Roychowdhury of Bally for helping me in different ways.

Special thanks to Eashani Sengupta for helping me in locating the Bonedi baris in Bally and accompanying me to those houses.