There are a number of Kali temples in and around Calcutta (now Kolkata); of which some were pretty old. A number of Kali Mandir are situated by the side of Hooghly river near Baranagar in North 24 Parganas district of West Bengal like Joy Mitra Kali Bari (Kripamayee Kali) of 1850; Pramanik Kali Bari (Brahamayee Kali) of 1853 and Dakshineswar Kali Mandir (Maa Bhabatarini) of 1855.

All these temples were built during the middle of the nineteenth century and there is a gap of two years or more in between them. The presiding deity in each of these temples is Goddess Kali. The similarity lies that each and every temple is of nabaratna (nine pinnacled) style of Bengal’s temple architecture.

The zamindar Joy Narayan Mitra who lived in Shovabazar built this beautiful nabaratna temple along with twelve aatchala (eight roofed) Shiv Mandir of 39, Harakumar Thakur Strand, Baranagar, Kolkata – 700036 in the Bengali year 1257; which, according to Gregorian calendar comes to 1850. The temple was inaugurated on the Chaitra Sankranti (the last day of the Bengali month), i.e mid-April. There is a nat mandir in front of the temple where previously a team of Bhakta mandali used to perform kirtan (a song in praise of God).

Daily worship is performed in the temple; and on each amavasya (new moon) special puja is held. Apart from that the other festivals which are held every year is Chaitra Sankranti (the foundation day of the temple); Posh Sankranti and Deepabali. Large number of people assemble here on the day of Deepabali and fireworks are lighted. Instead of anna bhog luchi bhog is offered to the Goddess. 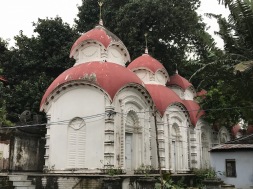 Of the twelve Shiva temples; six are on each side and they had a fresh coat of paint like the main temple. The twelve Shiva temples are dedicated to Pashupatinath; Biswanath; Baidyanath; Chandranath; Amarnath; Bhubaneswar; Adinath; Taraknath; Somnath; Kedarnath; Umananda and Rameswar. All the twelve aatchala Shiv mandirs are on a raised platform and a flight of stairs is there to reach there.

There are two entrances to the temple – the main entrance is facing the Ganga and there is a beautiful gate on which stands two lions. As you enter, you will find six Shiva temples each on both the sides. There is also a garden. There is also another entrance by the side of the temple. 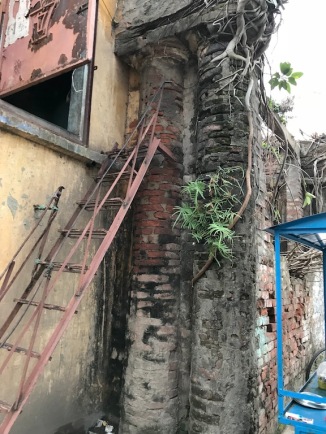 Remains of the Chadni Ghat.

There are two nahabatkhanas just outside the main entrance; but only one remains; though in dilapidated condition. Earlier music used to be played from here during the festival time. There was also a chadni ghat; the pillars of which remains till day. The ghat was built along the same time as of the temple.

The beautiful idol of Kripamayee was made of kosthi pathar (touch stone) and one will smell the beautiful scent of incense stick which definitely make you feel good.

According to Sri Debkumar Mukherjee, this temple stood on an erstwhile Dutch cemetery. In this context it is to be noted that the Dutch had settlements previously in Baranagar. I came to know from Sri Mukherjee that a Brahmin from Kotulpur area of Bankura district came to this temple a day before the official inauguration of this Kali bari and told Joy Narayan Mitra that he will worship the goddess. At this Joy Mitra was surprised and told the Brahmin that he himself had seen him in his dream.

I found a stone plaque under a tulsi mancha near the temple and Sri Mukherjee told me that Balananda Brahmachari came here around 1900 and that was written in the plaque in a code language. Earlier animal sacrifice was practiced here. When Balanandaji was meditating in this temple, a goat which was being sacrificed sprang to his lap and he immediately told that henceforth there would be no animal sacrifice and that was being written here in this plaque.

I visited this temple a number of times, and, on each occasion, I found the puja-like atmosphere which made my mind filled with joy.