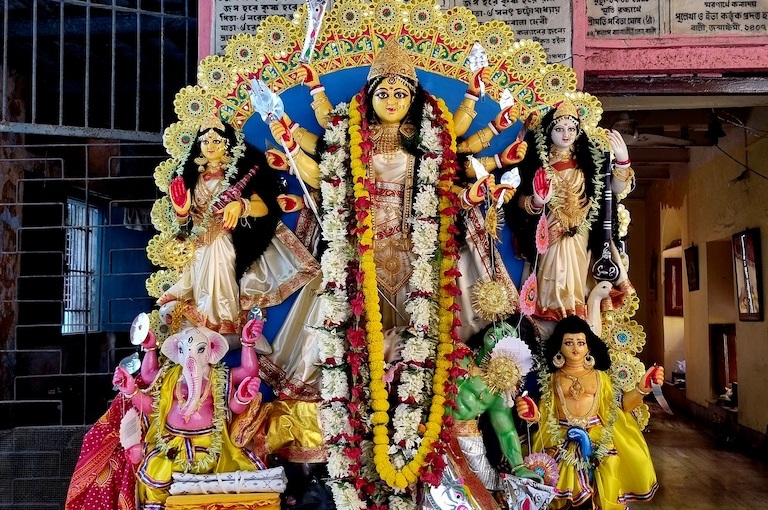 Durga Puja, is no doubt, the greatest festival of the Bengalees. It is held in autumn; whereas Basanti Puja is held six months later in spring. It is normally held in the Bengali month of Chaitra (April). Though not celebrated in such a grand way like the Durga Puja; but still it is worshipped in a number of places. One such place is Bally Harisabha of 207, Goswami Para Road in the district of Howrah for more than eighty years.

My first visit to Bally Aryadharma Sangrakhani Sabha (Bally Harisabha) was some years back when I was searching for old temples in Bally area. It was probably the panchami tithi and the goddess Basanti has already arrived at the Harisabha. I was very much moved by the beautiful ekchala protima so much so that I spent some time there and came to know that the puja was being celebrated there in a grand way.

The pandemic caused by Covid 19 prevented me to visit there for the last two years; but this year I paid a visit on Mahastami. It was late afternoon and the Astami puja was already completed. The idol of Maa Basanti together with Lakshmi, Saraswati, Kartick and Ganesh in traditional ekchala adds beauty to the entire place.

The Harisabha comprises of a temple where Radha Krishna is worshipped daily. Festivals like Rathayatra, Jhulanyatra, Janmastami, Rashyatra and Dolyatra are celebrated here apart from Basanti Puja and Jagaddhatri Puja. Coming back to Basanti Puja, I was told by Shri Joydeb Goswami that the puja started roughly eighty years back. In the initial stages the idol was prepared in the dalan itself. On sukla panchami tithi first the adibhas is held followed by bodhan on Ashok sasthi. The puja is performed following the rituals of Kalika Puran. During Sandhi Puja, 108 oil lamps are lighted. Special puja is held on Ram Nabami inside the temple sanctum. I was told that musical programmes were held in the evenings of Basanti Puja.

Another special thing associated with this festival is the malsa bhog which is served on dwadashi after the immersion of the goddess on Dasami. A large number of local people assembled here during the days of the festival making it more festive.

Special thanks to Shri Joydeb Goswami and Smt. Ashoka Ganguly.

How to go there:

Bally can be reached both by road and rail route. The nearest metro station is Dakshineswar. From there take an auto rickshaw and come to Bally. A ten minute walk or a very short toto ride will make you reach Bally Harisabha. Alternately, you may take any local train from Howrah and come to Bally or you may even avail local train in Sealdah-Dankuni section and get down at Bally Ghat station. Take an auto and reach Bally Harisabha in less than five minutes time.