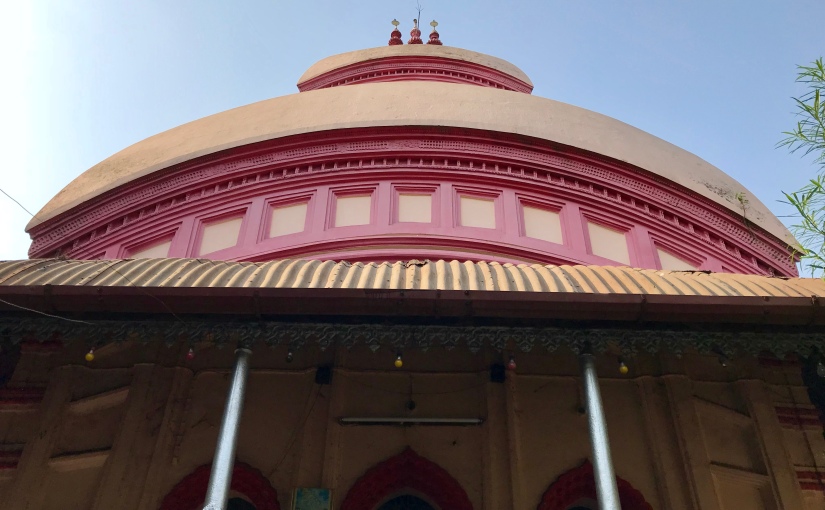 Baro Rasbari of 78, Tollygunge Road, Kolkata comprises of two complex – twelve Shiva temples and a pancharatna (five pinnacled) temple arranaged on three sides of an open courtyard and the other is a big aatchala (eight roofed) temple of Bengal’s temple architecture.

The Shiva temples are not in a good shape. The pancharatna temple in the courtyard which is dedicated to Radha Gobinda Jiu but now the idol is shifted to the big aatchala temple dedicated to Madan Mohanji. There was also a Dolmancha earlier. The construction of the pancharatna temple was started by Manik Mondal, son of Harananda Mondal on 16th Chaitra, 1216, which according to Gregorian calendar corresponds to end of March 1809. The construction took almost three years to complete (31st Baisakh, 1219, ie, mid May, 1812).

Uday Narayan Mondal, son of Manik Mondal started the construction of Madanmohan Temple in 1828 and it took six years to complete. The two foundation plaque on the two sides of the temple describes this fact.

Uday Narayan Mondal started the famous Jhulan festival. The other festivals that are celebrated here are Dolyatra, Gostho (normally held in April) and Rash. On the day of Dol (festival of colours), the idol of Radha Modanmohan is brought out of the temple sanctum and then began the puja. Different kinds of sweets are offered to the deity.

I have visited this temple complex a number of times and on each visit I feel the puja-like mood. I met one of the family members of the Mondal family recently. Sri Pradip Kumar Mondal was very helpful and, according to him, the devotees can touch the idol only on the day of Dolyatra every year.

During the Rash festival, which falls on a full moon day in the month of November the idol was placed on a temporary Rashmancha.

There was a nahabatkhana in the corner of the main temple which was earlier used during the time of Rash and Gostho.

Kirtan was also performed during the festival times. A big fair used to be held during the time of Rash. Items specially mat, different types of wooden articles, brooms and bati of Bawali (used for cutting things) are among the various items on sale. In recent years fairs used to be held but not of that granduer.

The idol of Madanmohanji is made of touchstone (kasthi pathar) and Radha of asto dhatu (an alloy of eight metals). There was a beautiful tulsimancha in the temple compound

Different types of puppets are on display during the Rash festival on the three sides of the temple. Stories from Ramayana and Mahabharata are depicted there. A lot of people came here to witness the festival and the fair.

I am really indebted to Sri Pradip Kumar Mondal and Sri Pankaj Chakraborty.