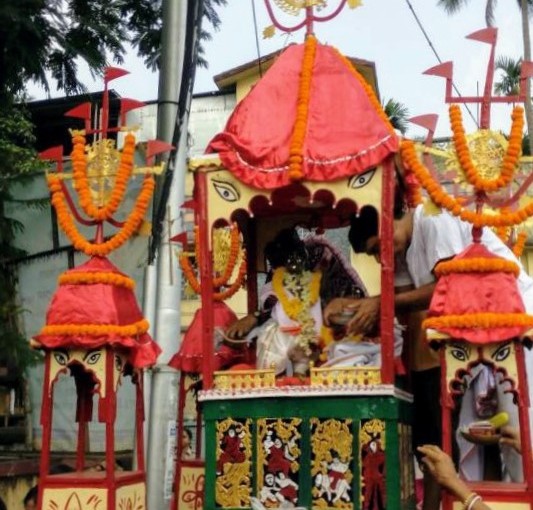 Bhadreswar, a municipal town of Hooghly district of West Bengal can be reached both by road and rail. It is roughly forty minutes from Howrah by train in the Howrah-Bandel section of Eastern Railway. This industrial town finds mention in Bipradas’ Manasamangal. During the medieval times this area was a renowned seat of Sanskrit learning.

The place has several temples of which Annapurna Mandir of Telinipara built by Baidyanath Bandopadhyay in 1208 Bangabda (1801 A.D) deserves mention. A close look into the temple will reveal that it deviates from the traditional nabaratna style of Bengal’s temple architecture. The present temple has undergone major renovation according to Sri Adwaitya Banerjee, family member and trustee of the temple.

The presiding deity is Devi Annapurna made of astodhatu and Lord Mahadev of silver placed on a wooden throne. Apart from the traditional festivals, daily worship is performed here.

But the thing which attracts me is Rathayatra or chariot festival on the auspicious day of Akshay Tritiya held in the Bengali month of Baisakh (April-May) every year. When we speak of Akshay Tritiya, the first thing that comes to our mind is halkhata (opening of new book) in many business establishments including shops. Akshay Tritiya is an annual spring festival of the Hindus. It falls during the Sukla Paksha. Akshay means prosperity, success and tritiya denoting third. Hence, it is named as “third lunar day.”

Rathayatra in Telinipara on the day of Akshay Tritiya attracts a lot of devotees. Initially, it sounds strange; but on the chariot instead of Lord Jagannath are seated Devi Annapurna and Lord Mahadev. A special puja is held on that day in the morning. The chariot which is used now has nine pinnacles and made of brass; though I was told that previously it was of silver.

The rathayatra is special in the sense that after coming out from the temple in the morning the chariot stops at each and every household so that the people can offer their worship to the deities. Is is not interesting? Maa Annapurna wants to enquire about the well being of the people of Telinipara as if the mother is enquiring about the well being of her children. The celebration continues till the evening.

At the Ganges ghat people are offered khicuri (a meal made of rice and pulses), labra (a vegetable preparation), payesh (a preparation made of milk with rice) and chutney. In the evening during the return journey, the chariot suddenly stops at Telinipara Barowaritala as if Devi Annapurna refuses to return to the temple where she will remain for the entire year. To convince her to return, the idols of Lakshmi-Narayan Jiu are brought in a palanquin from the main temple to the place where the chariot is waiting. It is late evening and the night is approaching.

The goddess finally returns to its place of worship late in the evening where she is bathed with seven seas oil, water, perfume and dressed in new clothes and again placed in the wooden throne in the temple. Here the devotees can touch the goddess and perform rituals by offering sindur (vermillion). I have been informed that after Maa Annapurna returns to her temple, devotees are offered sweets, watermelon and sarbaat. Kirtan is also performed on this occasion.

The temple can be reached by road – Grand Trunk Road which passes through Bhadreswar. Get down at Bhadreswar Telinipara or else if one opts for the rail route, the nearest station is Bhadreswar in Howrah-Bandel section. From the station take a toto to reach the temple.

I am grateful Sri Adwaitya Banerjee.