I along with a small group visited the temples of Patrasayer and Hadal-Narayanpur early this month and Kalanjay Shiva Temple was our first destination. The temple is located in an open space and the mandir has received a fresh coat of paint. This temple looks like an ek ratna mandir “with open verandah all around with arches on piers”. The corridor on all the four sides of this temple suggests that this ek ratna may have originated from a rekha deul.

There is no foundation stone but I have been told by the priest that this ek ratna temple was built by Malla King Chaitanya Singh (1758-1806). The priest was so kind that despite the fact we reached there after 12:00 in the afternoon, he opened the door of the temple and took us inside the sanctum. Daily worship is peformed here.

I have been told the Shiva lingam there is swayambhu meaning “that is created by its own accord”. The main festival is Gajan festival of Kalanjay Shiva held every year on the auspicious day of Akshaytritiya in the Bengali month of Baisakh (April-May) and lasts till the full moon (purnima) of the same Bengali month. The festival is very famous.

Our next stop is at Sridhar (Salgram) temple. It is a large, laterite temple with crude terracotta decoration on its sides. The temple is of traditional aatchala and east facing founded by Ghosal family in the nineteenth century. The temple has triple arched entrance and a close look will reveal that much of the decoration has been damaged.

Just a few meters from Sridhar Temple, I spotted another deul in a pathetic state. The temple has not been renovated. I am not sure whether daily worship is performed here.

Our next destination is the three temples all founded by Ghosals situated side by side at Ghosal para a little away from Sridhar Temple. All of them are unique and south facing.

The temple on the left of the picture is a pancharath deul Shiva Temple. About twenty feet in height, this temple is built of laterite like other temples of the region and has a comparatively large terracotta idol of Hara-Parvati just at the top of its entrance. The temple has survived the taste of time. 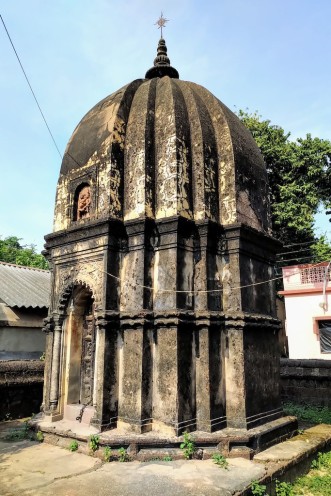 The middle one of the three temples is Raghuvir (Salgram) Temple. Unlike the traditional aatchala temples, it is a “low-towered char-chala” and there is a very little gap betweeen the two phases of char chala.

Built of laterite, the temple has rich terracotta decorations. Situated on a higher pedastal this temple has a triple arched entrance. The centre panel has decorations from Krishnalila. That apart dasavatar, many gods and goddesses and social picture are reflected through the terracotta panels. Most of the terracotta works are intact.

The third temple in this compound is a dalan type temple situated on a higher pedastal dedicated to Goddess Kali. A part of the front portion of the temple has undergone blue colour. The front wall is devoid of terracotta decorations.

But one thing to be noted about this temple is that there are four large terracotta idols on the back side facing the road. All the four idols are intact.

There are a few other temples in Patrasayer; but owing to lack of time I skipped them and went for Hadal-Narayanpur. I returned to Kolkata on the same day.

It can be reached from Bishnupur or Bankura either by car or by bus. From Barddhaman, one can opt for Barddhaman-Patrasayer-Bankura bus service. It can also be reached by rail from Masagram station in Howrah Barddhaman chord line via Bankura Damodar Railway of South Eastern section of Indian Railways. The nearest railway station is Patrasayer.

Special thanks to Sri Amitabha Gupta.