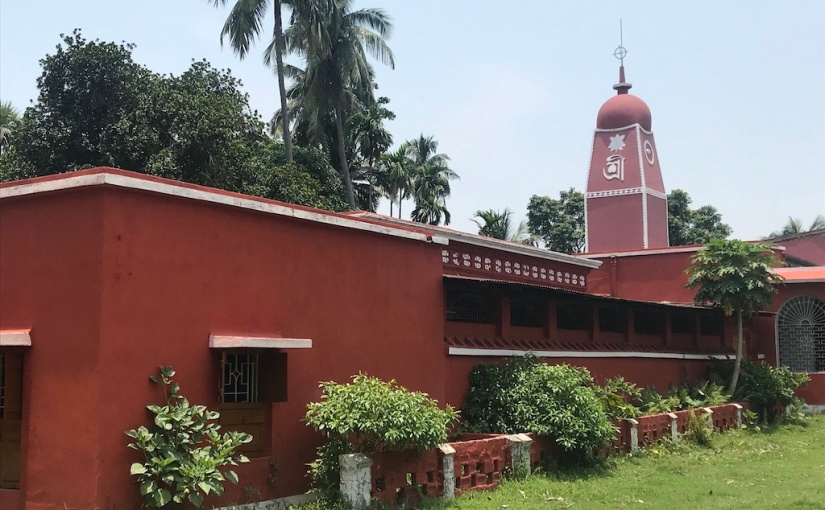 A beautiful temple housing the idols of Nandadulal Jiu and Radharani is situated at a place called Saibon or Saibona in North 24 Parganas district of West Bengal. This is the third Krishna idol after Ballavji of Serampore and Shyamsundarji of Khardah.

The east-facing temple has a high peak just above the sanctum. When I visited the temple for the first time in June last year, the climate there was very hot and humid; but surprisingly once I enter the temple it was pretty cool inside. The idols of Nandadulal Jiu and Radharani are placed on a wooden throne.

The wooden idols of Jagannath, Subhadra and Balaram are also there. It is to mention that outside the temple there is an enclosed area with a gate in the front where the rath or chariot is kept. You will find it on your left hand side while entering the temple.

Daily puja is performed here and the main festival is Maghi purnima (usually held in the months of January or February every year) and Dolyatra. During Maghi purnima, this place was crowded with devotees coming from different corners and there is old custom being practised for more than four hundred years to get a glimpse and have darshan of the three Krishna idols – Radhaballav, Shyamsundar and Nandadulal – on a single day from sunrise to sunset.

On the day of Dolyatra, the idols of Nandadulal Jiu and Radharani are taken out from the main temple to the nearby octagonal Dolmancha by a palanquin. Then there Debdol (normally held at dawn) is performed. I was pretty lucky to visit the temple this year on the day of Dolyatra and found people sprinkling abir (coloured powder) to the idols. It was a rare thing to watch. The Dolmancha was renovated in 1954.

Just outside the main temple on the right there are two beautifully-coloured aatchala Shiv mandir on a raised platform. It is presumed that Shivaratri is also celebrated here due to the presence of these two Shiva temples.

There is a story about the three idols. Apart from the story of Rudraram, there is another saying that Birbhadra Goswami after bringing the stone from Gaur reached Khardah and took the stone from the Ganges ghat at Khardaha. From then onwards that ghat came to be known as Shyam-er Ghat. With the help of a Vaisnav sculptor Birbhadra made three Krishna idols from the same stone. He named the idols as Radhaballav, Shyamsundar and Nandadulal. The responsibiity of the worship of Ballavji was entrusted upon Rudraram while that of Nandadulal was given to Lakshman pandit of Saibon. It is to be noted here that the three idols of Radhaballav, Shyamsundar and Nandadulal were established on the auspicious day of Maghi purnima tithi. For this devotees crowd these three temples on that day.

I am indebted to Sri Mohini Mohan Mukhopadhyay for some information from his book “Khardaher Shyamsunder – Pratisthata Vol. IV”