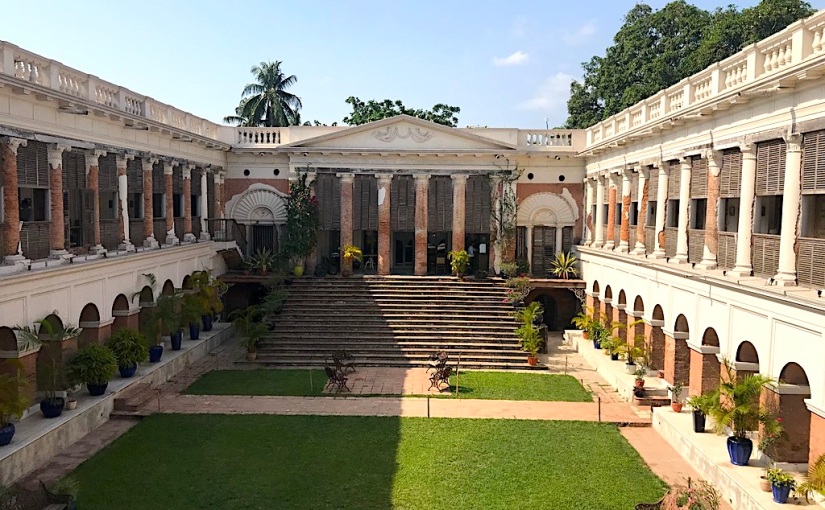 Bawali, a village in Budge Budge II block of South 24 Parganas district was once regarded as a temple town. Here one can see a number of temples, of which now most are in ruins belonged to the Mondals, who were the zamindars of this area.

The founder of the Mondal family was Basudev Ram and it dated back to the sixteenth century. It was during the time of Shova Ram, grandson of Basudev Ram, the title of Mondal was awarded to them. During the tenure of Raja Ram, the grandson of Shova Ram, the Mondals were entrusted the ownership of a number of villages including Bawali by the commander-in-chief of the King of Hijli. But the family flourished during the time of Harananda Mondal, the grandson of Raja Ram. It was only during the first decade of the eighteenth century that the Mondals set up their residence here.

With the passage of time the trade dwindled thereby the fortune of the Mondal family of Bawali. This had an impact on the mansion and the temples also. The residence built by the Mondals was known as Mondal Mansion. This magnificent double storied building soon lost its charm and later was in ruins.

But thanks to Mr. Ajay Rawla who took upon the mamoth task of preserving this heritage only a little more than a decade ago. He consulted architects who were expert in restoration work not only from India but overseas to make sure that this building looks more or less what it was during its initial days. The Bawali Rajbari maintains its old charm with modern amenities which makes it unique. 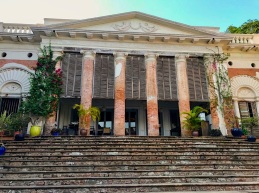 A view of the Rajbari 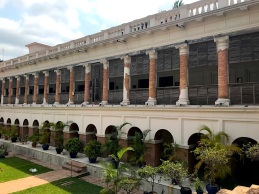 The rustic view is maintained.

I have seen pictures of this magnificent rajbari but when I visited it on May last year, I found a grand welcome waiting for me at the entrance by playing of conch shells. The interior is simply superb – the old rustic look is maintained and everything is kept in spick and span. Not only the rooms are renovated but one will enjoy all the benefits living in a rajbari. Different category of rooms are there for various budgets – the Classic Heritage; the Zamindari Jr Suite; the Royal Suites and the Dak Bungalow. There is a library which was once used by the Mondal zamindars was remarkably renovated. 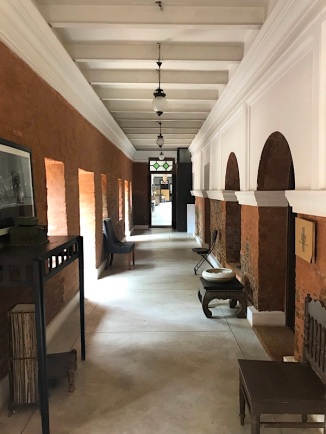 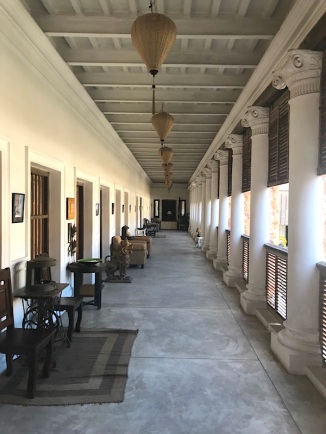 Another view of the corridor of the Rajbari.

Apart from the traditional dining room found in hotels, I found to my utter surprise a room with matching furniture and lighting where one can have a royal lunch or dinner.

Later a month later when I visited the Rajbari for the second time I brought my family for a lunch which was served in a zamindari way in terracotta earthen pots coupled with mouth watering Bengali dishes.

One of the old chairs.

The courtyard had a number of benches – all old and rustic keeping in mind the time frame. You will simply think that you have gone more than two hundred years back. Another thing I would like to mention is I found a number of photographs – all in black and white adorning the walls of the Rajbari which reminds us of the glorious past. 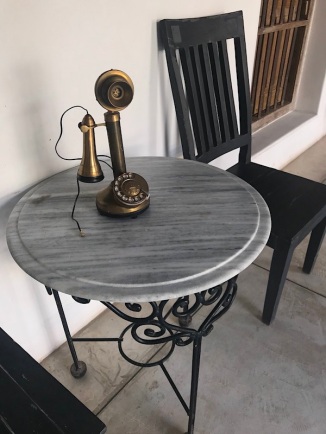 Different old articles like old telephone, lighting torch (mashal), petromax hazac adorn the alleys. Sitting there you will definitely consider yourself being within the Rajbari itself.

There is a pond where you will be welcomed by the white swans. The chandeliers will make the atmosphere royal and, one thing, I would like to mention is the warm hospitality which I enjoyed during my visit to The Rajbari Bawali thrice.

The Rajbari Bawali can be reached both by train and by car. The nearest train station is Budge Budge on Sealdah south section.