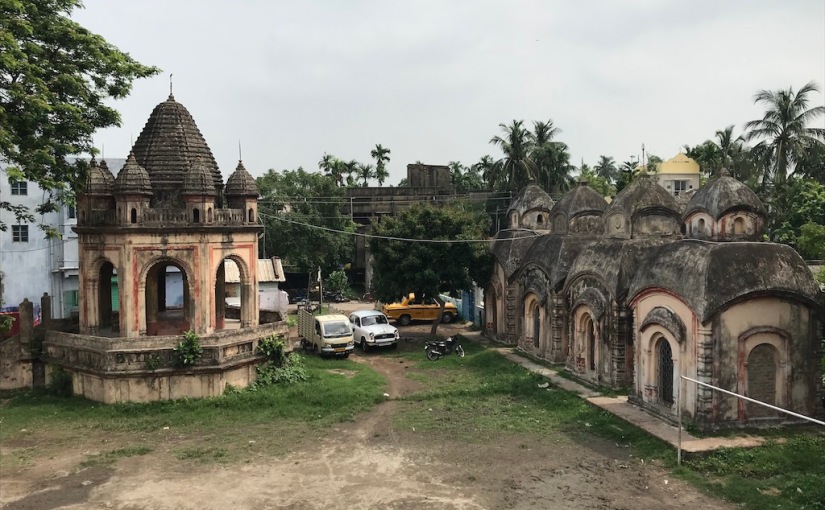 Panihati, a small town in the neighbourhood of Kolkata has both religious and historical importance. In the earlier era, it was a famous trade centre. It used to trade with Jessore. This town was called by the name of ‘Pannyahati‘. In the sixteenth century this place was a major centre of the Vaisnabas, and even the Shaibas, the Tantrics and the Buddhists had their centre of worship here. So naturally this place is very holy (Punnya Hatti). Later on it may be converted to Panihati.

There are many temples in and around Panihati and by the side of the Ganges. This place had many ghats – Ramchand Ghat, Baromandir Ghat, Taranath Babu’s Ghat, Panihati Bazar Ghat just to name a few. Great men like Chaitanya Mahaprabhu, Ramakrishna Paramahansadev, Swami Vivekananda, Rabindranath Tagore and others visited Panihati.

A short walking distance from Ramchand Ghat will lead one to an open ground on the left. There is an old but beautiful eight pinnacled Rasmancha and just opposite to it there is a collection of four aatchala (eight roofed) Shiva temples. Every year during the period of Rash purnima (full moon) which normally falls in the month of November, a fair takes place in this ground. In the earlier days this Rash festival was very famous. Puppets and dolls made of gold were put to display and it attracted a large number of people from far off areas.

There is a two storied old building just opposite to the rasmancha and it houses the temple of Radha Gobinda Jiew (Panihati Rashbari) founded by Zamindar Gouri Charan Roy Chowdhury more than two hundred fifty years ago. Gouri Charan had a large zamindari estate. A stone plaque tells us about it. According to the priest, Shri Tarun Chakraborty, the temple was earlier known as Peniti Dham. Though Rash is the principal festival here, Janmastami, Jhulan and Dolyatra are equally celebrated here with pomp and gaiety.

The idols of Radha Gobinda is made of touch stone and is very beautiful. Shri Chakraborty said that there is also a Dolmancha there but I have not seen it. Daily worship is done by him. Though the idols of Radha Gobindaji was installed by Gouri Charan Roychowdhury, the temple was built by his son Joy Gopal Roychowdhury. Shri Chakraborty said that the rasmancha had undergone minor renovations during the time.

The four Shiva temples are of the same time as that of the rasmancha. The first and the fourth are of one pattern and the second and the third are of another pattern as far as the upper chala (roof) is concerned. Shivaratri and Nil Puja are also held here.

To visit the temple, the nearest railway station is Sodepur on Sealdah-Barrackpore line. Take an auto and reach Ramchand ghat. Get down there and take the left turn and walk for about five minutes by the side of Ganges until you find a open field on your left. The rasmancha can easily be spotted. Alternately, take any bus from Shyambazar five-point crossing going to Sodepur. Get down at Sodepur and take either a toto or an auto to the Ramchand ghat.