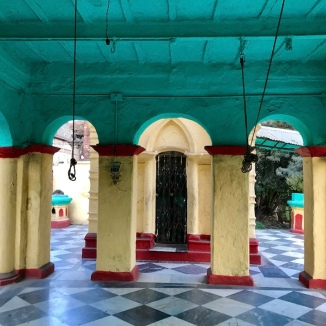 The temple is basically of an aatchala type with a nat mandir and houses the idols of Radha Krishna. Lord Krishna is made of touchstone (kostipathor) and Radha is made of an alloy of eight metals (astodhatu). The tiles used in the temple were prepared by Burn & Co. Raneegung. There is a tulsimancha adjacent to the temple.

A beautiful two-storied rasmancha is present in the courtyard which adds to the grandeur of the temple. It is used during the Rash festival when the deity is placed on the mancha. Rash purnima is a full moon day normally held in the month of November. Rash is a major festival here and the most striking thing is a four-day puppet dance which is held in the temple courtyard during the evening. Apart from Rash, the other festival which deserves mention are Snanyatra, Rathayatra (also known as Chariot festival), Jhulalyatra, Janmastami, Annakut and Dolyatra (also known as festval of colours). On Janmastami, palagaan or one type of song is sung in the evening.

The bhog is served four times a day – at dawn during the time of Mangal Arati, butter and white rock sugar (michri) is offered to the deity; at midday there is annabhog comprising rice, pulses (dal), bhaja, tarkari and rice-based pudding (payesh); in the evening after dusk luchi and payesh and finally at night at around 8:30 pm only milk is offered to Radha Krishna. Arati is performed three times a day except at night. Fruits are only offered to the deities in ‘Baisakh‘ or the first month of the Bengali calendar and in the second month or Jaistha, malsha bhog or bhog prepared in clay items. 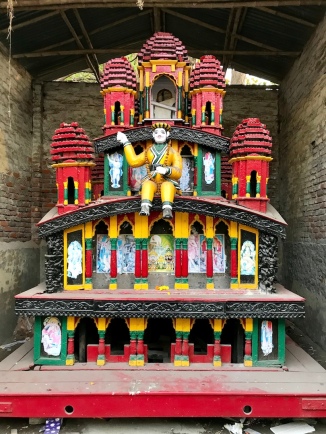 There is a nahabatkhana, though not in good shape now, stands on the opposite side of the temple. According to Sri Loken Ghosh, senior member of Ghosh family senhai was last played here at least two decades ago. At present only recorded version is played.

There is also a rath or chariot which is being used during Rathyatra. The present chariot was made in 1924 at a price of four thousand seven hundred rupees. The chariot is unique and it is kept at a place close to the temple. The idols of Radha and Krishna ride in this charot.

To reach the temple:

After crossing Vidyasagar Setu, go straight and reach Belle Pole. Cross the road and take a toto and ask the driver to take you to Dalalpukur. Reaching there take a few steps and the temple will fall on your right.