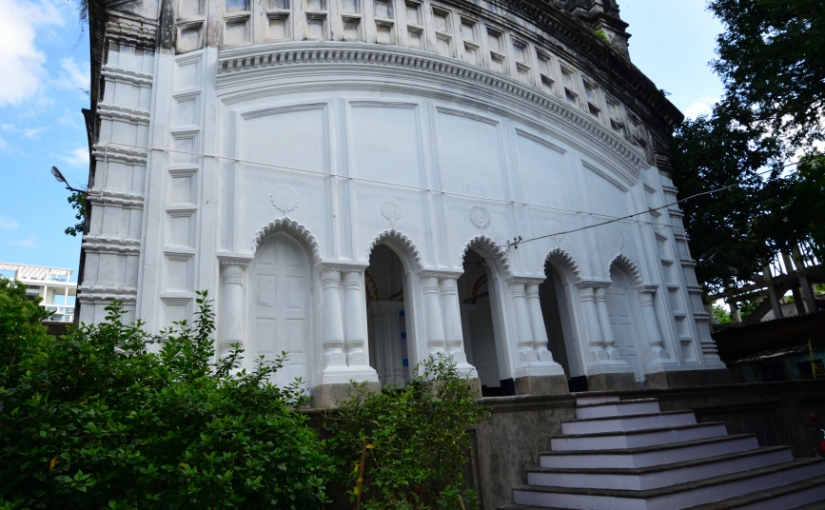 It is 110 feet in height and is nine pinnacled or nabaratna temple. There was a rasmancha close to the temple where during the Rash festival, the deities of Radhakanta and Radharani were installed and worshipped. But almost a decade ago the rasmancha collpased.

The Radhakanta Temple was built by Ramanath Mondal. The construction work began in the year 1796 and completed in 1807. The temple was open on the auspicious day of Posh Sankranti (the last day of the ninth Bengali month of Posh), 1216 as per the Bengali calendar. Though not written in Sanskrit, it is assumed from the plaque that it is written in primitive Bengali script, and the dates written on the stone are in Saka era, which when converted into Gregorian calendar shows the above dates in A.D.

The family deity of the Mondals is Lord Krishna, and the deities of the temples in and around the banks of Adi Ganga in Chetla and Tollygunge area are its various manifestations.

The temple is made of bricks. It is a two storied temple of nabaratna style. The descendants of the Mondal family live in the temple premises. According to Gopal Krishna Mondal, for the construction of the temple, a large pond was dug; and the mud was baked for preparation of bricks. When the digging process of the pond was going on a large mast of a ship was unearthed from there. It showed that such large ships sailed on the waters of Adi Ganga, and, definitely it was clear that how wide Adi Ganga was.

The temple had floral stucco works with beautiful motifs. The temple had “a huge flat roofed nat mandir“. It is rather difficult to take a full photograph of the front side of the temple due to shortage of space. Festivals like Jhulan, Rash, Dol and Janmastami are celebrated here.