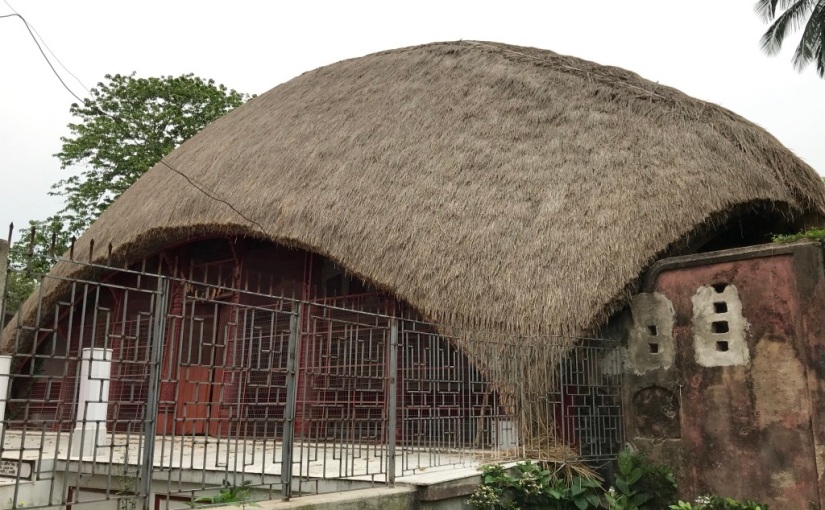 Aatpur is a village in Jangipara block of Serampore subdivision of Hooghly district of West Bengal. The village is named after Atar Khan who was a zamindar of the area. Aatpur has a number of temples along with an octagonal rasmancha and a square pancha-ratna dolmancha together with a thatched-roof chandimandap. But the star attraction of the temples in Aatpur goes to Radhagobinda Temple built by Krishnaram Mitra in 1786 A.D (1708 as per Saka era).

The temple complex has a number of Shiva Temples – all of Bengal’s traditional aatchala type. Some of them have terracotta decorations in the front panel. Apart from the famous Radhagobinda Temple, the complex also has an aatchala temple with porch on triple entrance dedicated to Kashinath Shiva and as per the foundation plaque it was built in 1773, thirteen years earlier to Radhagobinda Temple.

The Shiv mandir is on a raised platform and it is comparatively larger than the other aatchala Shiva temples.

The front panel has exquisite terracotta works, though some, due to age, have been destroyed. But still then majority of the terracotta panels remain. 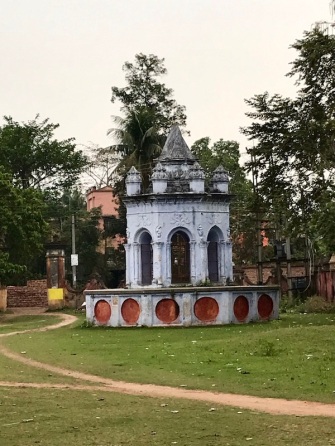 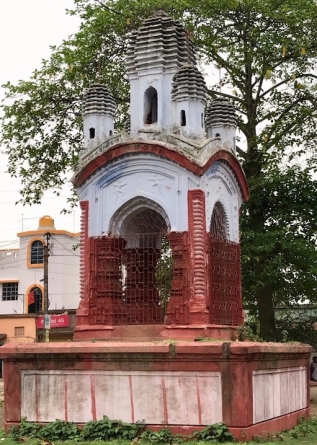 Once you enter the temple complex you will first spot the octagonal rasmacha placed on a raised platform on your left. The rasmancha and the dolmancha is dedicated to Radhagobinda Jiu. As per the stone plaque, the rasmancha was built in the Bengali year 1298, which according to Gregorian calendar comes to 1892. The rasmancha has stucco decorations and human figures. It has also decorative turrets. The domancha, like the rasmancha is also on a raised platform with square base. The pancharatna dolmancha has five ridged rekha turrets. One of the aatchala Shiva temples is located close to the dolmancha.

Of the five Shiva temples in the complex, one is built in 1751; the other two – Jaleswar and Phuleswar in 1769; Kashinath Shiva temple in 1773 and another aatchala Shiv mandir in 1773

The central attraction of the temple complex is the 100 feet high Radhagobinda Temple built in 1786 by Krishnaram Mitra. The temple is on a raised platform. It is a charchala (four roofed) porch with triple entrance attached to an aatchala temple. The temple is the finest specimen of exqusite terracotta work. The panels depict stories from the Ramayana and Krishnalila. The terracotta work can be seen in the panels, walls and in the pillars. Figures ranging from different geometrical designs, floral designs, the war between Ram and Ravana; Kali fighting demons and European soldiers can be seen.

Aatpur is 58 kilometres from Howrah. It can be reached both by road and by train. The nearest station is Haripal on Howrah-Tarakeshwar line. Get down at Haripal and one will find either trekker or bus to reach Aatpur. It is about half-an-hour travel from Haripal.