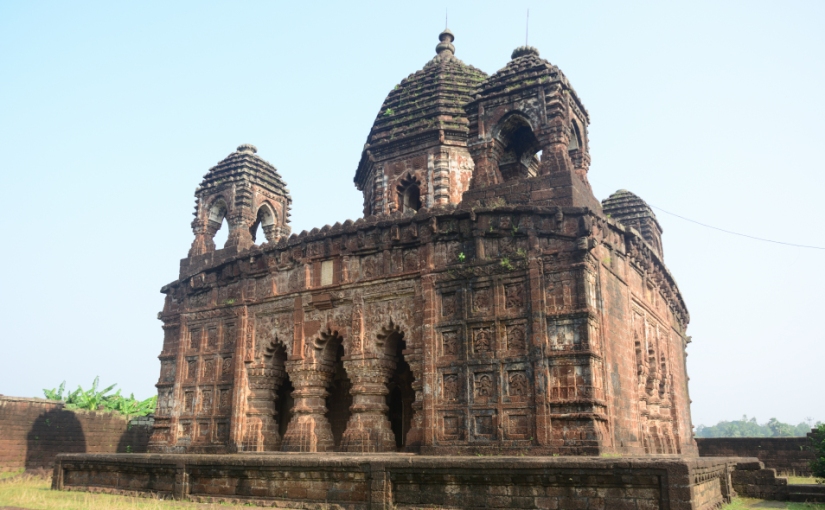 Bishnupur in Bankura district of West Bengal is famous for terracotta temples. But the temples of Joypur roughly 16 kilometers away has slipped into oblivion. The most prominent temple – Gokulchand Temple (an ASI protected monument) of Gokulnagar deserves mention. It is the largest laterite stone temple of the district.

Joypur: Though I reached Joypur late in the morning, but my journey begins at about three in the afternoon. It’s hot outside but I was travelling in an air conditioned car. On my way I found two temples – a Shiva temple in rekh deul style and another an aatchala temple with triple arched entrance renovated recently dedicated to Lord Vishnu. Both are in good shape and are in a slightly raised platform. I found some scenes from Krishnalila on the side panels. The fragrance from incense stick reminds me that daily worship is performed here. I came across a few old dilapidated temples on my way but instead of wasting any further time I went straight to Dutta para.

There I found a south-facing nabaratna temple of Radha Damodar. It is a large temple with triple arched entrance.

There is no foundation date but it is assumed that the temple was built in the nineteenth century. All the ratnas are ridged rekha pinnacles. The temple is in good condition. The Dutta para nabaratna temple has two triple arched entrance – one from the southern and the other from the eastern side.

The temple has rich terracotta works on both the entrances. The top most part of the central arch panel shows Krishna and Radha with the gopinis. The left arch panel shows a battle scene from The Mahabharat between Arjun and Karna; while the right arch panel depicts the battle between Ram and Ravana from The Ramayana.

As previously said the temple has two entrances; therefore there are two doors. The door on the southern side leading to the temple sanctum has engravings of dasavar tash (cards) on the door panels. Inside the garbagriha (inner sanctum), Damodar (salagram sila) is daily worshipped.

Ashort distance away in De para, there is another nabaratna temple with ridged rekha pinnacles dedicated to Lord Vishnu. The temple is about 40 feet in height. I found that the base of this temple is much higher than the one in Datta para. The temple has two entrances from the eastern and southern sides. This temple is maintained by the family owners. It has rich terracotta decorations on both the sides and is in a pretty good condition.

The central arch panel shows scenes from The Ramayana – Ram ascending the throne of Ayodha. The panels are designed in such a way that it appears to have a three-dimensional effect. The wall panels shows several social scenes, dasavatar and scenes from Krishnalila. The temple was constructed in the middle of the nineteenth century.

A further away is a beautiful octagonal rasmancha where the pinnacles are onion-shaped. However, there is no terracotta decoration in it. Like the temple, the mancha is in a raised platform.

After visiting these temples on my way, the driver stopped at a renovated deul temple. It was the temple of Gandheswar Shiva. The temple has received a fresh coat of paint and is on a raised platform. Inside the sanctum I found a giant Shiva linga of Gandheswar Shiva, which is perhaps one of the huge Shiva lingams of the district. I was lucky to take the photograph as it was open at the time of my visit.

Rautkhand: Next I went to Rautkhand about 5 kilometers north-east within Joypur P.S. In the eastern part of this village at Napitpara I came across an abandoned pancharatna temple.

It belongs to Dey family. The south-facing brick temple is about 30 feet in height and is in a raised platform. I was told that the temple was built in the eighteenth century. Like other temples, it has a triple arched entrance. The panels depict beautiful terracotta works depicting social, and mythological scenes apart from Krishnalila. I found a large number of tulsi trees. One thing which disheartened me is a large crack at the central arch panel of the temple. I went inside the temple and found a fresco panel. But due to utter neglect the same got faded. I was lucky to take the photograph of the panel but was pretty fast as there may be chance of snakes.

Rajagram: From there I went to Rajagram (also in Joypur P.S) 4 kilometers from there. The locals also call this Rajagram. Here I found the Giri-Govardhan temple.

It is of aatchala type with a single entrance of Giri-Govardhan type on a slightly raised platform. About 30 feet in height, this brick temple is unique. Due to lack of pratisthalipi (foundation stone), we cannot get the correct year of foundation. But it is assumed that it is over two centuries old. Terracotta figures of elephant, lion, tiger, bear, etc finds place in the panels.

A little away from here is an octagonal seventeen pinnacled rasmancha with rekha turrets. The mancha is placed on pedastal made of brick. It is about 35 feet in height. It reminds me of a similar rasmancha of Baro Taraf at Hadal Narayanpur except the latter has rich terracotta on eight sides.

Last I went to a dalan temple of Damodar. The temple is situated within the house of the Rahas. The temple is unique in the sense that the ground floor is made of laterite stone while the first floor is from brick. I was taken upstairs by one of the family members to the thakur ghar where I found the salagram sila of Damodar. The sila is worshipped daily. The front verandah has some coloured fresco decorations.

On my way back to Banalata Resort I saw an aatchala Gopal Temple on a raised platform with triple arched entrance at Goswami Para. It has received a coat of paint except the chalas.
There are also terracotta temples in Baital, Maynapur and Supur; but owing to shortage of time I could not cover them in my trip to Joypur.

The best option is to take the morning Rupasi Bangla Express from Santragachi station and reach Bishnupur by 9:30 am. From Bishnupur either take a car or an auto or even a bus to Jaipur. It is less than an hour’s journey to reach Joypur. You can halt at Banalata Resort in Joypur as I have done and explore the place. There are many other things to see in Joypur apart from the temples.

5 thoughts on “Temples in and around Joypur, Bankura”