I had gone to Chandannagar a number of times; but last year during Jagaddhatri Puja, when I was going to Bhadreswar from Chandannagar by auto via Grand Trunk Road, I noticed four Shiva temples in an enclosed courtyard. The temples look more or less like deuls. I was so much interested in them that I left the auto there and went to see them.

On a closer look, I noticed that the temples are hexagonal in shape and each temple has a plaque facing the Grand Trunk Road. I enquired and came to know that the temples belong to some Srimany and they were almost 171 years old; though daily worship was still being performed on a regular basis in the morning.

As said earlier that the four Shiva temples are within an enclosed courtyard and there is a gate which remains locked after the daily worship is perfomed. There I found a comparatively new stone plaque installed later from which it became clear that the temples were founded by Haraprasad and Kashinath Srimany in the year 1847 as per the Gregorian calendar and 1253 as per the Bengali calendar. Each temple was dedicated to a person connected with the Srimany family – the first temple was dedicated after their father Rammohan Srimany; the second Shiv mandir after their mother Anandamoyee Dasi; the third temple after their eldest uncle Bhagabat Srimany and the last one after their eldest aunt Kousalya.

On a closer look at Plaque numbers 1 and 2; it is evident that the Shiva lingams in both the temples are known by the name of Sri Sri Parbatinath while that of Plaque numbers 3 and 4 are known as Sri Sri Shiv. All of them were built in the year 1768 as per the Saka era. The writings are also artistic. 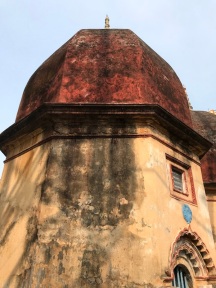 Another view of the temple.

The picture of the Shiv Mandir on your left shows that the temple is hexagonal in shape and the temple has not received a fresh coat of paint in the recent years. The Shiva lingam is not black in colour. Each temple has one door facing the road and on the top of the each door just below the individual plaque there is a short motif.

I happened to go inside the courtyard to look at the massive bhog ghar which is currently in ruins and the area is covered with weeds and grasses and one will not be surprised if there is snake and other insects. I happened to meet one family member and came to know there was a Durga dalan inside their house where Durga puja was held in the distant past.

In order to visit the temple take any local train from Howrah and get down at Mankundu station and you can either take an auto or a rickshaw to reach the temple. Alternately take any bus which goes through the G.T. Road and you spot the temple easily.